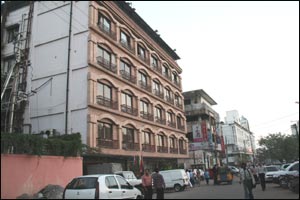 C Venkatesh / fullhyd.com
EDITOR RATING
7.0
Food
Service/Courteousness
Ambience
Value For Money
7.0
6.0
6.0
NA
Suggestions
Good for date/family
NA
Easy parking
NA
Long waiting
NA
The hotel lists www.belsonstaj.com as its URL, but a stroll down the Internet will tell you that the domain's expired (as we write this in early 2006). This chalta-hai approach could be a part of that deliberately underplayed character.

Think Marlon Brando, and think On The Waterfront.

Tucked into one of the several gullies that link S D Road and S P Road, and less than a stone's throw from its cousins, the Taj Tristar and the Abid's Taj, the building too reminds you of Brando's leather-jacket and 3-day-stubble. Hulking, and surrounded by architectural riff-raff, not the kind you'd want to spend your dark evening near. The street's so crowded, in fact, that you'd be hard pressed to haul your arm back, assuming you actually wanted to throw a stone.

The only worthy target for any stones is the patented-Hyderabadi version of manana. What else could explain away the fact that one of the better vegetarian restaurants in the twin cities lurks within?

The Scene
This is certainly a surprise package, but with some hints strewn in the street for the discerning treasure hunter. It's hard to park even your butt, let alone your 4-wheeler, in the cramped space outside, but the valets are infectiously enthusiastic. The doorman, like the hotel, wears his years a little heavily, but is welcoming. If he's in the mood, he freely dispenses advice on anything, from elections to education.

The lobby has the obligatory bookshop, travel agent, receptionist, and dusty sofas. Turn into The Melting Pot, and the skyline brightens into an almost-viridian hue. Tables, mirrors, more sofas, waiters, and the unmistakable fragrance of vegetarian Udupi food.

The Food
A firmly middle-class restaurant should have no surprises. And except for a few outre recipes - Walnut Manchurian is distinctively audacious - what's on offer is the staple diet of the vast Indian vegetarian belly. If you're here in the morning, go straight for the Breakfast Buffet, which is perhaps a shade higher priced than it should be, at Rs. 60, "inclusive of all taxes". There's also an interesting High Tea Platter, priced the same, for eveningers. That is, between 3:30 and 6:30 in the afternoon.

Other times are mealtimes, of course.

But forget about all that. Here is one of the best vegetarian thalis your reviewer has eaten. It's plain, unpretentious, tasty, and doesn't leave you feeling like a bloated whale. The Jowar Thali is a little misleading. "Oil free" refers only to the Jowar Rotis. The rest of the dishes that go with the thali have as much oil as the regular thali, but that's really not much more than you'd use at home.

At Rs. 75 plus a 5% "Service Charge", it's a trifle more than one would expect going by the ambience. But if you're willing to filter out the surroundings - or indeed, factor them in as "ethnic" color - it's on par with the competition both in terms of taste and in terms of service. In fact, the service here is probably a notch better than at most.

If you're hankering after that bloated-whale feeling then head for the priciest part of the menu. It'll be hell on your arteries, but The Earthquake promises to work wonders with 8 flavors of ice-cream.

The Verdict
Don't judge this book by its cover. This is level-headed, down-to-earth vegetarian food. Excellent value for slightly high money.

ADVERTISEMENT
This page was tagged for
Raja belsons Taj Mahal
belson taj hotel jobs
taj hotel Patni centre hyderabad
bellson taj hotel in patny
belsons taj hotel near patny, contact number
Follow @fullhyderabad
Follow fullhyd.com on
About Hyderabad
The Hyderabad Community
Improve fullhyd.com
More
Our Other Local Guides
Our other sites
© Copyright 1999-2009 LRR Technologies (Hyderabad), Pvt Ltd. All rights reserved. fullhyd, fullhyderabad, Welcome To The Neighbourhood are trademarks of LRR Technologies (Hyderabad) Pvt Ltd. The textual, graphic, audio and audiovisual material in this site is protected by copyright law. You may not copy, distribute, or use this material except as necessary for your personal, non-commercial use. Any trademarks are the properties of their respective owners. More on Hyderabad, India. Jobs in Hyderabad.