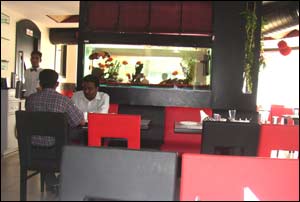 EDITOR RATING
7.5
Food
Service/Courteousness
Ambience
Value For Money
7.5
6.5
6.5
8.5
Suggestions
Good for date/family
NA
Easy parking
NA
Long waiting
NA
The Scene
If it isn't too much of a detour, the best way to reach Bowl O' China at Begumpet (the Patigadda X Roads) is via Necklace Road. Any other way might result in you hitting a traffic bottleneck.

Bowl O' China is about as much value for money as respectable Chinese food can get in Hyderabad. You get to seat in air-conditioned comfort and on decent upholstery, and the service is better than at Nanking or Alex's Kitchen. The place, done up in red and black, does its bit to look Oriental, but it's too small to do much about its looks, really.

The crowd - and there is a crowd usually - consists mostly of executives from around the area, though there's the teeny-bopper factor as well given the VFM (a couple meal here costs Rs. 200-250 on average, but you can get out in Rs. 80 too if you have just eloped and are currently looking to merely survive). The place belongs to the Hyderabad House group, and everything is reminiscent of that, especially the matter-of-fact service.

The Food
The USP. Bowl O' China has an extensive menu, and impresses by having a whole 2 pages labelled Chef Special. Not bad for something that grew up on the coattails of Hyderabad House.

Things can get a little spicey at Bowl O' China if you aren't careful, but there isn't much you can do to be careful anyway, so you might as well let go. Apart from the standard Manchow and Hot 'n' Sour soups and spring rolls and corn, the place digs deeper into Oriental cuisine to unearth stuff like Dimsum Baskets, Spinach Corn Toast, Shredded Chicken With Chilly Scallions and plenty of seafood starters.

Apart from a whole section dedicated to seafood, the main course consists of all standard rice and noodle items in an elaborate 25-strong spread that also includes stuff like Basket Noodles and Corn Mushroom Fried Rice. Plus, an array of some 20 side dishes from Veg Manchurian to Bhutan Chicken and Double Mushroom In Hot Garlic Sauce.

You can't really complain about the food, especially if you are a Chinese food buff - like we said, they have enough self-worth to file 20 items under Chef Special, and then, the portion sizes in rice and noodles are quite benevolent. Perhaps the meager roster of desserts could have included at least Honey Noodles. But then, Banana Split at Rs. 50 ain't bad.

The Hyderabad House connection means that the place specializes in takeaway (there are branches elsewhere too - call 66661234/5678), and it might not be a bad idea either, given that there's no place to seat a waiting crowd here. Just remember that fried and crispy stuff doesn't taste nearly as good coming out of an aluminium foil.

The Verdict
Bowl O' China is a cross between the bandi around your house and Chinese Pavilion. In other words, just what Chinese-addicted Hyderabad needed, to have its dignity and eat up too.
Share. Save. Connect.
Tweet
BOWL O' CHINA SNAPSHOT
EVENTS AT BOWL O' CHINA
There are no events at Bowl O' China scheduled currently.
BOWL O' CHINA USER REVIEWS
1 - 1 OF 1 COMMENTS
POSITIVE  |  NEGATIVE  |  NEWEST  |  OLDEST  |  MOST HELPFUL  |  LEAST HELPFUL
USER RATING
5.0
3 USERS
Food
Service/Courteousness
Ambience
Value For Money
8.0
8.0
7.0
7.5
Good for date/family - NA
Easy parking - NA
Long waiting - NA
Aviral Pandey on 3rd Dec 2010, 10:17pm | Permalink
They served me non-veg food (even after I told them once that they probably what the are serving is non-veg), even though I ordered veg.

ADVERTISEMENT
This page was tagged for
the bowl company hyderabad
bowl o China kukatpally
Bowl o china opposite begumpet police station
bowl o china karkhana
map of hotel bowl of chaina hydrabad baigampait
Follow @fullhyderabad
Follow fullhyd.com on
About Hyderabad
The Hyderabad Community
Improve fullhyd.com
More
Our Other Local Guides
Our other sites
© Copyright 1999-2009 LRR Technologies (Hyderabad), Pvt Ltd. All rights reserved. fullhyd, fullhyderabad, Welcome To The Neighbourhood are trademarks of LRR Technologies (Hyderabad) Pvt Ltd. The textual, graphic, audio and audiovisual material in this site is protected by copyright law. You may not copy, distribute, or use this material except as necessary for your personal, non-commercial use. Any trademarks are the properties of their respective owners. More on Hyderabad, India. Jobs in Hyderabad.