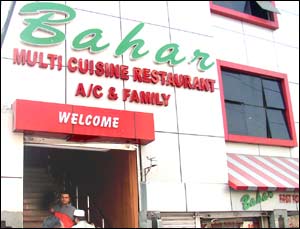 Sure, that's a gross exaggeration, but it won't hurt anyone's feelings. Bahar is one of the most popular Hyderabadi biryani joints - right up there with Paradise, Madina and Shadab. And it shows all that you can get away with if you serve good food.

The ground floor is as bad as it gets in service - and realizing that perhaps, they added an air-conditioned top floor, where the waiters at least have more time for you than 10 testy seconds, and actually make eye contact. It must be taking a lot out of them, given that Bahar clearly defines itself as being in the food business, not in the restaurant business.

The Food
Bahar is popular mostly for the chicken and mutton biryanis (though they have the veg, egg and fish varieties, too), but it serves over 120 items in a fairly articulate menu, spanning the predictable Mughlai, Tandoori and Chinese cuisines. There are soups, kebabs, dozens of Mughlai chicken and mutton dishes, a few kidney and brain dishes, fried rice and noodles, a small veg stretch, and Qubani Ka Meetha plus several ice creams.

Like all It is not expensive - a veg biryani costs Rs. 60 and a mutton biryani Rs. 100, and an average meal for two can work out to less than Rs. 200. The food is of course good, especially the entire non-veg list (which is 70% of the menu).

The Verdict
Try not to think of Bahar on a day that you are fasting. Else, try not to think of the distance or the traffic for once, wherever you are.
Share. Save. Connect.
Tweet
CAFE BAHAR SNAPSHOT
EVENTS AT CAFE BAHAR
There are no events at Cafe Bahar scheduled currently.
CAFE BAHAR USER REVIEWS
1 - 3 OF 3 COMMENTS
POSITIVE  |  NEGATIVE |  NEWEST  |  OLDEST  |  MOST HELPFUL  |  LEAST HELPFUL
USER RATING
4.3
7 USERS
Food
Service/Courteousness
Ambience
Value For Money
9.0
8.0
8.0
10.0
Good for date/family - NA
Easy parking - NA
Long waiting - NA
Saikumar on 20th Sep 2012, 11:36am | Permalink
"Cafe Bahar sucks big time for me".

Service is pretty bad here. The staffs are never courteous (a set of ass-moles). Only a Maa-Behan gaali will work wonders here! If you are some kind of a rough person, then it is a place for you. Only upon several requests that the waiter might visit your table to take order. Once he is at your table, he stands in a pose that reminds you of the younger version of 'Amitabh Bachchan' in movie Coolie. I wanted to instantly become Danny Denzongpa and kick out the Bachchan of this Amitabh. Alas! Some things never change.

By the way after all this drama, the food arrives, and it sucks big time. It tastes like Chinese torture. The kitchen reminds you of maggot-infested meat. Yak Yak all the way. Avoid this place conveniently, without a second thought. There are much better places
RATING
2
Kishore on 28th Aug 2012, 11:44am | Permalink
it's fashionable to talk of biryani at bahar as must-do in hyderabad, but a little reality check.

1. the service at bahar sucks, especially downstairs. they are unresponsive to the point of seeming rude. this is not from a sample size of one - i've been there a few times, it's always like that. i has to ask for a spoon and fork 3 times before i got them. after 2 times, they gave a spoon but not a fork. after another, pestering reminder, they got the fork. also, they never got me an extra bowl of gravy (mirchi ka salan or whatever), despite asking for it twice. they just nod when you ask, but never do it. and what they give by default is not sufficient for the quantity of the biryani.

2. the egg biryani at bahar has rice made using chicken gravy. when questioned, they claim that every place in hyderabad does this, and if any restaurant said it wasn't, it was lying. (that is a load of bullshit, of course, but the people talking to you have the distinct air of the people you expect to be manning places specializing in hyderabadi food.) these people evidently do not know of a vast, vast breed of vegetarians who eat eggs. to me, serving chicken to a person who asked for egg biriyani is cheating, and the owners should be imprisoned for something that would easily rate as a religious, communal crime.

3. the vegetarian biryani is no great shakes (i am a veggie, and do not know about the non-veg fare). and as i said, the gravy, that can add a little taste, is meagre, and they ignore requests for extra helpings.

it's easy to get carried away by locals who swear by bahar, shadab, paradise etc. just because it is fashionable to swear by them. in almost all of these places, the service is demeaning, and the veg biryani pretty bad.
RATING
3
krishna chandan on 1st Oct 2014, 11:34pm | Permalink
boss ur the only person like me.iam sick of telling people that egg is veg.whenever i order egg biryani i end up getting tiny chicken pieces.every restaurant seemed to take this as common thing.can u tell me where can i get pure egg biryani in hyd or secbd
avinashkanna0 on 19th Nov 2010, 1:44pm | Permalink
its too good in non-vegetarian, ihad not experienced such a good & excellent taste of food anywhere else cafebahar ur greate....

ADVERTISEMENT
This page was tagged for
Cafe Bahar. 8.2. 3-5-815, Hyderguda, Hyderabad
bahar resturant hydarabad
bharcaferestaurant
cafe bahar hyderguda location
bahar cafe srnagar timings
Follow @fullhyderabad
Follow fullhyd.com on
About Hyderabad
The Hyderabad Community
Improve fullhyd.com
More
Our Other Local Guides
Our other sites
© Copyright 1999-2009 LRR Technologies (Hyderabad), Pvt Ltd. All rights reserved. fullhyd, fullhyderabad, Welcome To The Neighbourhood are trademarks of LRR Technologies (Hyderabad) Pvt Ltd. The textual, graphic, audio and audiovisual material in this site is protected by copyright law. You may not copy, distribute, or use this material except as necessary for your personal, non-commercial use. Any trademarks are the properties of their respective owners. More on Hyderabad, India. Jobs in Hyderabad.