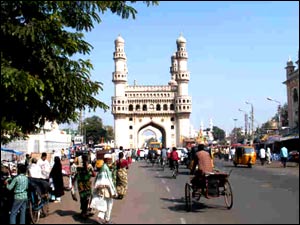 Ravi Mundoli / fullhyd.com
What can you say about this 4-century-old mosque that has not been said before? That it is beautiful and awe-inspiring? That it is loved and visited, photographed and filmed, and that its shadow is burnt into the very fibre of the true born Hyderabadi's being? Are we born with our senses preprogrammed to respond to the smells and sounds of those byzantine alleys and torturous bazaars? Do those spiral staircases form at least some of the double helixes of our DNA?

The Charminar is many things to many people - an instantly recognizable landmark for out-of-towners, a handy half-second establishing shot for filmmakers, a supremely convenient logo for everyone from municipal corporations to cigarette manufacturers. Perhaps most of all, it is an ancient but comforting presence at home, like a much-loved elderly relative or household help who reminds you of where you come from and makes no insistent demands on your time or attention.

Legends have sprung up all around it, like plants and creepers will in the cracks of abandoned buildings. They say that it was built by a monarch at the very spot where he prayed for the end of a plague. They say that there is a secret underground passage that leads under the city to the Golconda Fort, that silent sentinel that looms over the city even in this skyscraper age. What is known for sure is that it was commissioned by Mohammed Quli Qutub Shah to commemorate the end of the plague, and completed in the dying years of the 16th century.

Today, it stands regally in the middle of the hustle and bustle of the Old City. A ticket will allow you into the gallery above the vaulted arches, and for a while you can pretend to be Qutub Shahi or Asaf Jahi royalty and look out over your realm. Higher up, at the uppermost level, is a small mosque and even higher still at the ends of those DNA staircases are the tops of the minarets, from where the view must surely be gob smacking. You won't find out, because the staircases are closed, thanks to some unfortunates who used the minarets for quick escapes from the slings and arrows of outrageous fortune.

No time of the day is really a bad time to visit; every hour has its charms. Go in the mornings if you want some quiet time to savour its elegant symmetry in the mellow light of daybreak. The city wouldn't have quite woken up yet, the shops will have just begun to shrug off the night, and the milling crowds of the evenings will not have bestirred themselves.

The blazing heat of the mid-day sun isn't perhaps the best time to spend on the scalding balconies and galleries. The one possible attraction that could draw you is that kitchens of the famous eating houses of old Hyderabad, the Shadabs and the Madinas will be going full tilt at doing what they do best, serving up the most delicious biryanis, kababs and faludas in town. It will be advisable to keep your cardiologist in the dark about these extra-curricular activities.

If you aren't averse to some crowd and noise, and are into what can only be called sheer atmosphere, you will doubtless cherish an evening visit. The whole place comes alive with the energy of the vendors and the visitors, and yet there is a relaxedness in the transactions and in the chai shops that is a throwback to a more dignified day and age. As the light fails and the muezzin's calls to prayer draw the faithful towards the Charminar's neighbour, the massive Makkah Masjid, the Charminar itself changes hues from the blazing white of mid-afternoon and reflects the setting sun's gold. Even later, as darkness falls, the lights turn on, revealing yet another aspect of this timeless monument.

Shades of Baghdad, Cairo, Istanbul and Isfahan are to be found in the sprawl of the bazaars. All manner of treats and trinkets are bought and sold and fixed price is an "innovation" that hasn't wormed its way here. Bangles, perfumes and attars, pearls, old books in ornate nastaliq and improbably coloured and named sweets rule the roost.'

ADVERTISEMENT
This page was tagged for
charminar municipal office address
Hyderabad.ka.charminar.
hyderabad ka charminar images
Charminar ADDRESS
charminar consultency address hyd
Follow @fullhyderabad
Follow fullhyd.com on
About Hyderabad
The Hyderabad Community
Improve fullhyd.com
More
Our Other Local Guides
Our other sites
© Copyright 1999-2009 LRR Technologies (Hyderabad), Pvt Ltd. All rights reserved. fullhyd, fullhyderabad, Welcome To The Neighbourhood are trademarks of LRR Technologies (Hyderabad) Pvt Ltd. The textual, graphic, audio and audiovisual material in this site is protected by copyright law. You may not copy, distribute, or use this material except as necessary for your personal, non-commercial use. Any trademarks are the properties of their respective owners. More on Hyderabad, India. Jobs in Hyderabad.