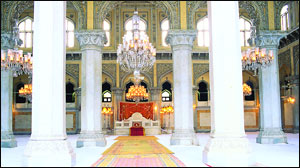 Ayanti Guha / fullhyd.com
First, you should remember that there were no traffic problems back in the 1750s. Also, if you were the Nizam or a member of his family, it is unlikely that you would be driving around yourself. From what we understand, they must have had enough money to hire a couple of chauffers.

That should explain any misgivings you might have about the location of Chowmahalla. To get there, you should have the dogged zeal of a tourist, pressing business in the whereabouts, or a private chopper. Okay, perhaps we are overdoing it - reaching any place in Hyderabad needs one of those three these days.

The fact remains that like most of Hyderabad's older tourist attractions, Chowmahalla is in no glamorous location. You have to hit Charminar - no breezy drive in itself - and then take a couple of confusing turns through the remorseless traffic there. If you are a beginner in this part of town, you might be back where you began, since those turns will most likely be wrong. But if you are lucky, you will see a green dilapidated 2-storeyed tenement-ish building with its unassuming boundary wall painted "Chowmahalla Palace" outside.

And some neighbour it is.

A feat of imagination is visualizing yourself being the owner of Chowmahalla Palace. We tried - it is simply not possible. Part of the reason is that the security guards there do not let you do any imagination - they do all of it. They imagine you being upto every evil possible, and guard you with a hawk's eye all across your tour. Tip: go on a weekend, when the crowds are denser - you will feel less of a terror suspect.

In case we missed the point so far, the place is big. Pardon us all over the place - it's a palace. And in case you didn't know, it is still private property, belonging to the Nizam.

The Chowmahalla Palace was the first palace to be built in the Asaf Jahi dynasty, and was where the Nizam entertained his official guests and royal visitors. If you've never heard of the Asaf Jahi dynasty or the Nizams, forget it - that's not what you came here for. It suffices that they were rich, and that they ruled. It's written all over the place.

The moment you enter the courtyard of the palace, it is an experience akin to having stepped in another age. The chaotic pace of the Old City fades away behind the huge wooden doors and the serenity of the place beckons you to come and explore the nooks and crannies to your heart's content.

The Chowmahalla Palace was constructed in the late 18th century. So one of the things that strikes you first is how it stands almost completely intact in its original avatar even today. Sure, it's gotten chafed here and there, but these things happen in 250 years. What matters is that the exterior paint of that era is still intact. The next time you see a Apex ad, you know what to do.

It took 10 years to build Chowmahalla, but it was almost overnight that it became renowned as an object of beauty and architectural magnificence. And it's not for no reason - the interiors and exteriors have been executed by master craftsmen, and the accessories only add to the beauty and regal grandeur of the place. No gaudy baubles adorn the walls here.

The palace is a synthesis of many architectural styles and influences, and is unique for its style and elegance. There are beautifully manicured lawns, lavish apartments, and adornments like crystal chandeliers all around - and the one thing that will catch your eye is the sparkling cleanliness. You can literally eat off the floor.

The official tour covers the following exhibits: Khilwat Mubarak, Bara Imam, Shishe-Alat, Clock Tower, Council Hall and the Roshan Bangla. Now we could tell you a little bit about each place, but then where would the fun be in seeing them face to face? So forgive us our secretiveness and see them for yourself.

The royal family's decision to open the doors of Chowmahalla in January 2005 may or may not have come as a surprise to the people of Hyderabad. But it has encouraged the voyeur is us all. The family photos of the Nizams down the years, their wedding snapshots and even baby pictures have all been painstakingly digitally touched up, and give you a never-before-allowed look into their lives and loves.

Among the ones that people gawk at the most are those of Princess Durru Shehavar and her cousin Princess Niloufer. These two ladies of the royal household were reputed to be two of the most beautiful women of their era, and their photographs do their bit to credence to the claims.

The Palace has seen many facets of the Asif Jahi dynasty over the years. The strife, the glory days, and the uneasy transition from being privileged royals to being nominal heads of their erstwhile state, are only some of the stories that the walls have been witness to. But unfortunately for us, we will not have the privilege to view the same as of Aug 2006 - the royal family has restricted the entrance to most parts of the palace. But the exhibits on display do much to assuage that disappointment quite well.

But the actual Chowmahalla (meaning four mahals or palaces) is still undergoing major renovations and the scaffoldings around it allow no errant tourist to get any forbidden peeks. For that, you have to wait till 2007.

You can spend a large part of the day gazing at the pastelled hues of the ceilings, with their floral motifs and the jharokhas on the outside of the Durbar, sit on the many benches near the fountain in the center of the courtyard, contemplate upon the cannons, and try to envision the palace from the days of yore. A life which was aristocratic and sybaritic gets revealed through the hazy process of imagination (okay, forget that quip in the beginning).

So, if the palace hasn't been in your itinerary till now, forget the traffic bit and show some dogged zeal now. The doors are open, and the past whispers to you to come and partake of the Shahi experience of being a Hyderabadi royal.
Share. Save. Connect.
Tweet
CHOWMAHALLA PALACE SNAPSHOT
EVENTS AT CHOWMAHALLA PALACE
There are no events at Chowmahalla Palace scheduled currently.
CHOWMAHALLA PALACE USER REVIEWS
1 - 2 OF 2 COMMENTS
POSITIVE  |  NEGATIVE |  NEWEST  |  OLDEST  |  MOST HELPFUL  |  LEAST HELPFUL
USER RATING
7.6
5 USERS
Quality
Service/Courteousness
Value For Money
9.3
8.7
8.0
lalit agarwal on 4th Apr 2013, 5:34pm | Permalink
my children wants to meet Princes Isra can i get email Id
Monica on 6th Oct 2010, 3:50pm | Permalink
Nominal entry fee per person.
If u want to carry a camera , per camera charges Rs.25/-(rates as per 6 months back,pls confirm)

ADVERTISEMENT
This page was tagged for
map of chowmahallah palace
chowmahalla palace matter in telugu
chowmahalla palace hyderabad reports
chowmahalla palace hyderabad maps
picnic spots in hyderabad
Follow @fullhyderabad
Follow fullhyd.com on
About Hyderabad
The Hyderabad Community
Improve fullhyd.com
More
Our Other Local Guides
Our other sites
© Copyright 1999-2009 LRR Technologies (Hyderabad), Pvt Ltd. All rights reserved. fullhyd, fullhyderabad, Welcome To The Neighbourhood are trademarks of LRR Technologies (Hyderabad) Pvt Ltd. The textual, graphic, audio and audiovisual material in this site is protected by copyright law. You may not copy, distribute, or use this material except as necessary for your personal, non-commercial use. Any trademarks are the properties of their respective owners. More on Hyderabad, India. Jobs in Hyderabad.