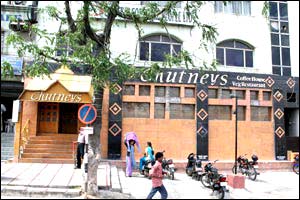 EDITOR RATING
9.0
Food
Service/Courteousness
Ambience
Value For Money
9.0
7.5
7.5
9.0
Suggestions
Good for date/family
NA
Easy parking
NA
Long waiting
NA
The Scene
It's almost a rule that if someone raves about something you haven't experienced yet, you will not eventually find it as good as they did. Chutneys' claim to fame is how often it beats that rule. Almost nobody comes out saying there's too much hype.

Arguably the most popular restaurant in Hyderabad (yes), Chutneys has fans who will go there knowing that there's an unbelievably long U-turn to take if you are coming from Nagarjuna Circle (Hyderabad has always had the smartest of traffic police), and will willingly wait, many times on road outside, for upto 30 minutes to get entry - on weekdays. And this, to a place that operates on 3 floors now.

What is impressive is that it's made that league purely on the food. The interiors are pretty characterless - there's a uniform Birdseye Maple wood shade all around, and that's about it. And the chattering crowds mean that it's not exactly where you'd go on a date (though you actually see a good number of young couples). And the service struggles to make the cut. Yes, there's only one reason, and it's compelling enough to keep the restaurant bustling at peak hours (it's open all through the day), and surprisingly populated even otherwise.

And yes, there's only one restaurant in town that plays songs from Saptapadi. And it feels good.

The Food
In case you didn't already know, it's the South-Indian - Andhra, actually - fare that makes people beat down the doors here. The Steamed Dosa, the menu proudly proclaims, is Chiranjeevi's favorite. You can question the logic - why should you like a dosa just because Chiranjeevi likes it - but it's hard to be logical about anything when you actually dig your fangs into the thing.

16 kinds of dosas, all the other standard South-Indian breakfast fare including upma, pesarettu, idli and puri, and delicacies like Babai Idli sinfully topped with butter, are embellished by 4 chutneys (2 coconut and 2 ginger) that are the soul of Chutneys' fare. Seriously, how many restaurants actually serve coconut chutney anymore?

Chutneys is actually multi-cuisine - there are entire North-Indian and Chinese menus here, in an impressive roster of 150 dishes. However, the signature preparations are all South-Indian - you find only the standard names anywhere else.

Chutneys also has a buffet hall upstairs, which is a good deal at Rs. 140 for the regular favorites of Chinese and North-Indian cuisine as well as specialties from South India. The restaurant is not exactly economy, but most people seem to think it's worth it. But if you think Rs. 29 is too much to pay for a plate of idlis, then allow Chutney's to convince you otherwise. They put up a strong case.

The Verdict
Chutneys can be addictive, and the only problem then becomes the distance - coconut chutneys can hardly hurt. In fact, like Harry Bellafonte sang, "Coconut water contains iron / Makes you roar like a lion." Find out if that is true.

ADVERTISEMENT
This page was tagged for
chutneys banjahills
chutneys punjagutta contact
chatneysin hydraabad
chutneys banjara hills to marriott
chutneys panjagutta reviews
Follow @fullhyderabad
Follow fullhyd.com on
About Hyderabad
The Hyderabad Community
Improve fullhyd.com
More
Our Other Local Guides
Our other sites
© Copyright 1999-2009 LRR Technologies (Hyderabad), Pvt Ltd. All rights reserved. fullhyd, fullhyderabad, Welcome To The Neighbourhood are trademarks of LRR Technologies (Hyderabad) Pvt Ltd. The textual, graphic, audio and audiovisual material in this site is protected by copyright law. You may not copy, distribute, or use this material except as necessary for your personal, non-commercial use. Any trademarks are the properties of their respective owners. More on Hyderabad, India. Jobs in Hyderabad.