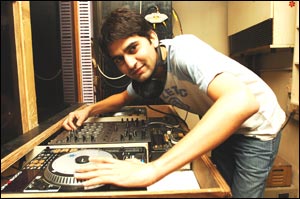 Charisma Murari / fullhyd.com
If he had any more 7s in his phone number, he would have had less 0s. Ah, you were expecting something a little more profound? Well, if that's the trip you wanna be on, give Anupam a call.

The man is the crown prince of a seriously male bastion - One Flight Down - and he plays some real groovy rock kinda music. Actually, we have been thinking that it just ain't too smart to hang out at that club. Why? The place just makes DJs out of unsuspecting souls. And that's classified information. We'd tell you but then we'd have to kill you.

Anyway, that's how Anupam got the initials 'DJ' to precede his name - too much time at OFD. And now he is addicted to Pink Floyd, The Doors and White Snake, and plays a lot of Club, House and Hip-Hop. He starts a gig with Hip-Hop, pushes the tempo a notch or two slyly, and then has the crowd in a complete trance.

ADVERTISEMENT
This page was tagged for
Anupam DJ
anupam dj & tech
anupam dj
Top 20 Dj Anupam.in
dj snupam
Follow @fullhyderabad
Follow fullhyd.com on
About Hyderabad
The Hyderabad Community
Improve fullhyd.com
More
Our Other Local Guides
Our other sites
© Copyright 1999-2009 LRR Technologies (Hyderabad), Pvt Ltd. All rights reserved. fullhyd, fullhyderabad, Welcome To The Neighbourhood are trademarks of LRR Technologies (Hyderabad) Pvt Ltd. The textual, graphic, audio and audiovisual material in this site is protected by copyright law. You may not copy, distribute, or use this material except as necessary for your personal, non-commercial use. Any trademarks are the properties of their respective owners. More on Hyderabad, India. Jobs in Hyderabad.