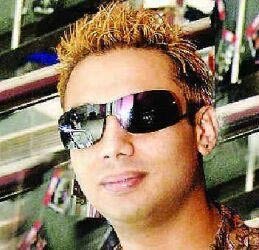 Charisma Murari / fullhyd.com
With DJ Shweth in da club, there is no need to shweth, er, sweat ...unless that's what you wanna do. The man is one party-animal. So, for a good time, that's who you call. Now, if this were a classifieds ad for the man, he would have probably received a bazillion responses. And if he still does, we will make him cough up some moolah, and his woman will make him cough up some blood. We think he is gonna like us more. Strike one, lady!

When he said that he "started out with Spanish Fly, where else...", we were worried we had stepped on some toes. Then after about 987,678,234 nanoseconds, our processor sparked into life. Er, actually he continued, "Pyramids, Bottles And Chimneys...". Phew!

Left to himself, Shweth would play some Progressive House and Trance, especially the Passengers and Remirez. But when he wants to kick back and relax, it's Classic Rock or Black. He thinks Hindi numbers sound awesome on a House remix.

And the king of loop stays in the loop on the hot music from around the world via the Net, mags and pals spread across the globe. He loves playing to private parties 'cos he finds them to be a bigger challenge. The energy that the crowd vibes across to him, wherever he plays, is what keeps him inspired.
Share. Save. Connect.
Tweet
DJ SHWETH SNAPSHOT
EVENTS AT DJ SHWETH
There are no events at DJ Shweth scheduled currently.
DJ SHWETH USER REVIEWS
1 - 1 OF 1 COMMENTS
POSITIVE  |  NEGATIVE  |  NEWEST  |  OLDEST  |  MOST HELPFUL  |  LEAST HELPFUL
USER RATING
10
1 USER
Friendliness
Musical Knowledge
Creativity
Value For Money
NA
NA
NA
NA
frzkhan on 14th Nov 2008, 1:25am | Permalink
Talent at par with world standards - Best DJ in India who can make even an guy with 2 left feet to dance to his beats.

ADVERTISEMENT
This page was tagged for
Dj shweth hyd
deejay jobs in hyd
lady dj hyderabad
email id of dj shweth
lady dj in hyderabad
Follow @fullhyderabad
Follow fullhyd.com on
About Hyderabad
The Hyderabad Community
Improve fullhyd.com
More
Our Other Local Guides
Our other sites
© Copyright 1999-2009 LRR Technologies (Hyderabad), Pvt Ltd. All rights reserved. fullhyd, fullhyderabad, Welcome To The Neighbourhood are trademarks of LRR Technologies (Hyderabad) Pvt Ltd. The textual, graphic, audio and audiovisual material in this site is protected by copyright law. You may not copy, distribute, or use this material except as necessary for your personal, non-commercial use. Any trademarks are the properties of their respective owners. More on Hyderabad, India. Jobs in Hyderabad.