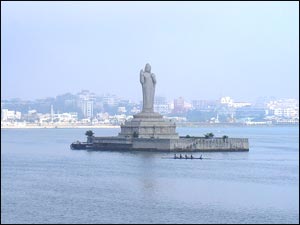 C Venkatesh / fullhyd.com
A country that can twist the saintly phrase "God Encompasseth Us" into a pub named "Goat And Compasses" is worthy of the envy of lesser folks. Hyderabadis make up for a lack of comparable linguistic wit with sheer obstinacy. Generations upon generations have stubbornly referred to the Hussain Sagar as "Tank Bund", which itself is a corruption of Tank "Bundh" (for "dam").

The erstwhile rulers of Hyderabad, with great foresight, created 3 sweeping lakes which are more or less in the city as it sprawls today. And in an inspired moment named them Hussain Sagar, Himayat Sagar and Osman Sagar. Toss these three names into any conversation with residents and you can walk away with the Nizam's Jewels while the citizens argue over which lake is which. But say "Tank Bund", and no one has any doubt.

That, as they say, is "apun ka Hyderabad".

The Bund itself is - a rarity in Hyderabad ? an arrow-straight road that has an APTDC Office at one end along with a fairly neglected Boat Club, and the upmarket Secunderabad Sailing Club at the other. The lake is supposed to be several square kilometers in area, but successive raids by "development" under various guises has left the exact area an open guess.

A loop around the road is a must. You can catch up on every bit of Hyderabad here. And if your mouth is open as you drive, you may even ingest some of it.

The starting point is the Tank Bund itself. At all times of the day, crowds of varying sizes and ages frolic, loiter, shop or simply while the time away on the Bund, kept company by the statues of Telugu heroes that line the road as the imposing, calm, monolithic, Buddha watches serenely from the middle of the lake. Hawkers and entrepreneurs with pay-per-view binoculars and telescopes turn up in droves as the evening falls. Neither they nor the omnipresent mosquitoes can dent the joie de vivre that abounds.

An old and decrepit children's park is at the far end of the bund, opposite the Katta Maissamma temple. Next to this, the Secunderabad Club's Sailing Annexe plays host to young, the rich and the restless. Once every year a sailing regatta is launched from this end of the lake as intrepid young men and women brave polluted waters and scare away migratory birds for a week or two.

The next quarter of the loop is as yet "undeveloped", but you soon run into the start of the "best part" of the lakefront ? the Necklace Road. First there's the Sanjeevaiah Park, home to romantic couples, hopeful cormorants, and the Yogi Bear Park for kids. Right next to this is the P V Narasimha Rao memorial, followed by Eat Street and sites for frequent exhibitions.

A little further down, if you can stay firmly in the left lane and steer away from the Prasad's complex, you'll run into the Lumbini Park, opposite which is the Buddha Poornima project. The Lumbini Park offers speedboat rides and short cruises to the Buddha statue and back. Both can be great fun. Parasailing is sometimes on offer too, as are horse rides and other such kids-entertainment-essentials.

Once an year the Ganesh Festival draws to a throbbing climax as statues are immersed in the lake watched by literally thousands out in their festive best. Close contact with these crowds is definitely only for the intrepid. The others can, and should, catch it on TV.

ADVERTISEMENT
This page was tagged for
hussain sagar lake full adress by bus
about Husain sagar in telugu
hussan sagar telugu web.com
distance of ganesh nagar ramanthapur from hotel jusTA on necklace road hyderabad
hussain sagar tank mapes
Follow @fullhyderabad
Follow fullhyd.com on
About Hyderabad
The Hyderabad Community
Improve fullhyd.com
More
Our Other Local Guides
Our other sites
© Copyright 1999-2009 LRR Technologies (Hyderabad), Pvt Ltd. All rights reserved. fullhyd, fullhyderabad, Welcome To The Neighbourhood are trademarks of LRR Technologies (Hyderabad) Pvt Ltd. The textual, graphic, audio and audiovisual material in this site is protected by copyright law. You may not copy, distribute, or use this material except as necessary for your personal, non-commercial use. Any trademarks are the properties of their respective owners. More on Hyderabad, India. Jobs in Hyderabad.