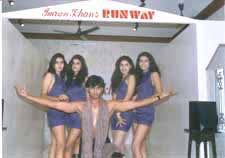 Priyanka Pulla / fullhyd.com
Modeling in Hyderabad took its baby steps with Imran Khan, and now, in its adolescence, he waits like a patient parent for it to commence its adulthood. Which he says is about 5 years away.

A fashion choreographer of great repute, Imran Khan started his career as a model himself in 1982, and set up Runway in 1997 after having established himself rather well. His academy today has about 400 students on roll, but only about 35 of them are up and on their way, being trained by Khan. The others who still have to make the grade in areas like physique, attitude and discipline required of a model, have to head home and iron their skills again before coming back. Khan is picky and has results to show for it too. Every year, at least one of his students enters the Femina Miss India, Grasim and Gladrags supermodel contests. In 2001, Reggie Verghese from his academy won the Gladrags title.

While he is the only instructor for modeling at Runway, he draws on the skills of a beautician, an aerobics instructor, designers and, foremost, his wife Mahnoor Khan, who is an accomplished designer and beautician herself.

Hyderabadis still have their misgivings for modeling, and the fashion scene is not vibrant enough to support full-time models. But the students of this academy often move to other cities and get assignments in movies, video albums and advertising campaigns. Famous ones in Hyderabad are Neeru's, Kalanjali and Chandana Brothers, all of which are graced by models trained at Runway.

Presently, Runway plans to tie up with a UK-based modeling agency to help it keep up with the growing demand for Indian faces. And that means much more on the platter for Khan's students.

Most of the big fashion shows in Hyderabad, and a small sprinkling abroad as well, have Runway's name attached to them. The Country Club shows, the Reliance prepaid launch, the Toyota Camry launch, the Ray-Ban killer loop glasses show, and private shows for many MNCs in Hyderabad are some of them. Khan choreographed the fashion shows at the Festival Of Asia held in London in 2003, as well the Birmingham Telugu Association's decimal celebrations in September.

ADVERTISEMENT
This page was tagged for
modelling agency in srinagar
indian model reggie verghese
London Management academy
Imran khan modelling in hyderabad
imran khan Srinagar model images
Follow @fullhyderabad
Follow fullhyd.com on
About Hyderabad
The Hyderabad Community
Improve fullhyd.com
More
Our Other Local Guides
Our other sites
© Copyright 1999-2009 LRR Technologies (Hyderabad), Pvt Ltd. All rights reserved. fullhyd, fullhyderabad, Welcome To The Neighbourhood are trademarks of LRR Technologies (Hyderabad) Pvt Ltd. The textual, graphic, audio and audiovisual material in this site is protected by copyright law. You may not copy, distribute, or use this material except as necessary for your personal, non-commercial use. Any trademarks are the properties of their respective owners. More on Hyderabad, India. Jobs in Hyderabad.