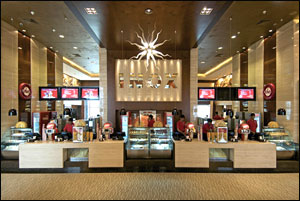 EDITOR RATING
7.5
Comfort
Ambience
Cleanliness
Audio/Visual Quality
7.0
8.0
10.0
10.0
Suggestions
Good for date/family
NA
Easy parking
NA
Decent legroom
NA
It is surprising how incongruous INOX is, launched as it has been in a period of severe economic uncertainties, and yet unabashedly targeting just those who can buy entire third-world countries using their HRA.

And if the product/service justifies what you've paid for it, like at a Novotel for instance, then complaining about prices would just be, as Maya Sarabhai would put it, too downmarket. However, the reality here is that while you, the customer, won't shy away from shelling out the dough to start with, you will end up feeling pinched.

It's not the ticket price - indeed, it is tacky to complain about it when it is the same as in any other multiplex, i. e., Rs. 100 (and Rs. 200, for some value-adds). There is however a vague unpleasantness that sets in when you get into the process of parking your vehicle within the premises. The parking fees are a put off, with a promise to reach obscene amounts if you're there long enough - there are hourly charges. So is the process of parking itself - a sinuous way down a bottomless netherworld, where you're not likely to remember where you'd parked if you're not alert enough.

Then, the way up to the movies isn't too straightforward, either. It's not just about waiting for a lift or taking a strenous flight of stairs. You first take the escalators on your right as you enter the mall, and at the 3rd floor, dodge to the one on the left, for a security check. The screens are on the 4th floor, and you need directions to get to each one. Again, the layout of the multiplex is chaotic, the screens are arranged too far from one another, and the doors not even immediately discernible from the rest of the interiors.

Outside the screens, the decor is intimidatingly 5-star-hotelish, with heavy-set doors, and upholstered walls and floors, but the bright lighting and the blaring film songs being played make it less of a deluxe experience. On the whole, INOX has a fussy look and feel about it, and when you compare it with the minimalism of a, say, Prasads, it is pretty puzzling - what is the point, and what could it have cost to keep it easy?

Each screen is insulated from the hubbub of the common area (which is essentially a passageway tracing half the perimeter of the mall) by a set of two doors. Inside, the first thing you notice is the walls bursting into the INOX logo and its sidekicks, resulting in a bit of loud stellar activity breaking the silence of the deep blue. The seating capacity ranges from 151 to 271. The top row of every screen consists of ritzy recliner seats, costing Rs. 200 each.

The viewing experience is doomed if you aren't shelling out twice the normal amount per ticket, and if you aren't at the start of the queue and quick enough to avoid being dumped onto the wings of the hall. The sound and light quality is expectedly first-rate, though.

The cafeteria is your land of plenty, and nothing is 'not available' here. There are samosas, rolls, pastries, a chat counter, as well as the regulars - the popcorn and the nachos - all in visible abundance. There's a lot to cheer up the ravenous, but you'd better be really ravenous if you want to dig in, because the prices here are higher than anywhere else in the city.

About parking mess, remember it is not only theater it is gvk mall


Pros:
Cons: parking enter and exit has only two lines !
RATING
10
Meenakshi Sinha on 3rd Jun 2019, 7:26am
.
Khan on 20th Dec 2010, 9:25am | Permalink
Hmm. INOX what can one say. you pay 250 bucks for a recliner and then only you can have a better feel of watching a movie else its compact. Was not allowed to take my Baby`s Food. what do they expexct a 1 year old to have nachos or Pop corns with its gums. i think they want to get the money spent on its construction or atleast a bigger chunk of money from customers who want to enjoy a movie. you come in your SUV and you MIGHT be lucky enuf to park near the Exit gate and not underground else you aint spared. IIITs a jungle down there. . . a can of coke it 75 instead of a 25, come on guys atleast a 30 is understood. i mean the way i felt after my visit there is like "you take it or leave it" we have rich people who for the status showoffs will pay.


Pros: Heavy parking charges, Confusion in parking lot
Cons: Good video and audio
RATING
5
Meenakshi Sinha on 3rd Jun 2019, 7:26am
.
Ritesh on 9th Jul 2010, 12:56pm | Permalink
have you seen a 3D movie? Dirty - used glasses are handed out (after having to pay for them). No other theatre puts a restriction of getting a kid less than 6-7 yrs old with you and having to pay.
Snacks are sold at exhorbitant prices. You cant carry a milk/water bottle or snacks for kids less than 3-4 years.

ADVERTISEMENT
This page was tagged for
Parking charges in gvk one mall
inox gvk one banjara hills photos hyderabad
Inox gvk one banjara hills screen size
fullhyd.com
www3 gp da mami bg 1com
Follow @fullhyderabad
Follow fullhyd.com on
About Hyderabad
The Hyderabad Community
Improve fullhyd.com
More
Our Other Local Guides
Our other sites
© Copyright 1999-2009 LRR Technologies (Hyderabad), Pvt Ltd. All rights reserved. fullhyd, fullhyderabad, Welcome To The Neighbourhood are trademarks of LRR Technologies (Hyderabad) Pvt Ltd. The textual, graphic, audio and audiovisual material in this site is protected by copyright law. You may not copy, distribute, or use this material except as necessary for your personal, non-commercial use. Any trademarks are the properties of their respective owners. More on Hyderabad, India. Jobs in Hyderabad.