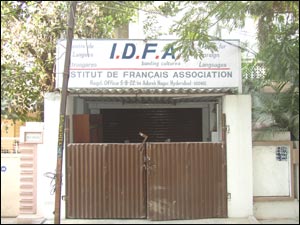 Vardhan A / fullhyd.com
The Merovingian, of Matrix fame, calls French a fantastic language, especially to caress with. And what better way to sample the delectable lingua franca than to learn it yourself? To know if you are being seduced or asked to "excuse someone's French", you'd need a distilled course of French by your side. The Institut de Francais is in just that business ? a made-to-order knight in shining armor, you might say.

Started in 2000, the IDFA (as the self-styled association calls itself now) is into taking French, German and Spanish cultures to the masses. Their approach is at once exciting and innovative. Their extensive use of IT has immensely endeared them to such diverse institutions as ISB, Infosys and NALSAR where they conduct in-house language courses. Where else would you have a chance to send your homework through e-mail or be taught by a French national herself?

The center itself isn't very big, but still accommodates close to 1,400 students every year, taking various levels of its language courses. They also have a Bureau d'Education that helps students going to Europe for their higher studies in their preparation. With a director who is into opera-singing, costume-designing and continental-cooking besides other things, you'd end up learning a lot more than just French here.

ADVERTISEMENT
This page was tagged for
ifda hyd
idfa company in hyderabad
www.german language institute adarshnagar hyderabad
institut de francais in hyd
institut de francais in hyderabad
Follow @fullhyderabad
Follow fullhyd.com on
About Hyderabad
The Hyderabad Community
Improve fullhyd.com
More
Our Other Local Guides
Our other sites
© Copyright 1999-2009 LRR Technologies (Hyderabad), Pvt Ltd. All rights reserved. fullhyd, fullhyderabad, Welcome To The Neighbourhood are trademarks of LRR Technologies (Hyderabad) Pvt Ltd. The textual, graphic, audio and audiovisual material in this site is protected by copyright law. You may not copy, distribute, or use this material except as necessary for your personal, non-commercial use. Any trademarks are the properties of their respective owners. More on Hyderabad, India. Jobs in Hyderabad.