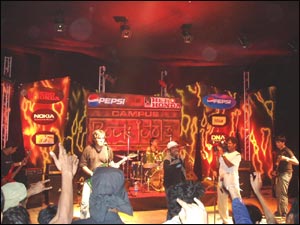 Ramakant D S / fullhyd.com
The menace starts as a single strand of thought. Gradually the irritation becomes more noticeable. Finally, it gnaws on the ceiling of your brain, till you shout out, "What the are they trying to pass off as music???"

You must have been there and felt that, haven't you? Normally at a coffee shop or at a mall, which have invisible speakers churning out the latest hit singles from the radio. The itching starts all over again, and you land up cursing the songs of our times.

Five young men from Hyderabad felt pretty much the same way. Only, this time they wanted to express it in a way they know best.

Legacy is another band that was a product of colleagues of the same firm wanting to jam along. The joke goes that nowadays the techies are so jobless they are looking for alternative means of enjoyment. Rajiv (lead guitar), Karthik (rhythm guitar), Suzuki (drums) and Ramki (vocals) who are all working in GE decided to take their first love a step further. As they themselves admit, Sharat (bass guitar) happened to them by pure chance. Ever since then, the band has been practicing regularly at "The Dungeon", as they call Karthik's garage in Vidyanagar.

This band that has only recently started to gain popularity believes in getting its basics first. With roots firmly planted on the ground, the group feels making music is more important than acting like rock-stars. Each of the members finds common solace in the sounds of Megadeth, Jason Becker, Metallica etc. With Thrash Metal and Speed Metal as Music Divine, Legacy nurtures dreams of making it big in Hyderabad's rock circles.

They have performed at Qwiky's Coffee Pub, 99 MegaHertz and also at a GE get-together. The band also figured in a prominent newspaper's article about "Rock bands and IT Companies".

ADVERTISEMENT
This page was tagged for
wwwsharat@ganesa.com
Hyderabad Live Bands
Legacy reviews
email, maps, directions, landmarks
Legacy telephone
Follow @fullhyderabad
Follow fullhyd.com on
About Hyderabad
The Hyderabad Community
Improve fullhyd.com
More
Our Other Local Guides
Our other sites
© Copyright 1999-2009 LRR Technologies (Hyderabad), Pvt Ltd. All rights reserved. fullhyd, fullhyderabad, Welcome To The Neighbourhood are trademarks of LRR Technologies (Hyderabad) Pvt Ltd. The textual, graphic, audio and audiovisual material in this site is protected by copyright law. You may not copy, distribute, or use this material except as necessary for your personal, non-commercial use. Any trademarks are the properties of their respective owners. More on Hyderabad, India. Jobs in Hyderabad.