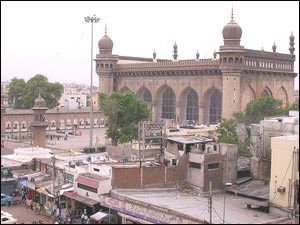 Non-muslims are not allowed to visit the mosque during prayer times and on Friday. But do visit when you can, and remember to sit on the stone seat. We'd love to have you come back someday.
Share. Save. Connect.
Tweet
MECCA MASJID (TOURIST SPOT) SNAPSHOT
EVENTS AT MECCA MASJID (TOURIST SPOT)
There are no events at Mecca Masjid (Tourist Spot) scheduled currently.
MECCA MASJID (TOURIST SPOT) USER REVIEWS
1 - 4 OF 4 COMMENTS
POSITIVE  |  NEGATIVE  |  NEWEST  |  OLDEST  |  MOST HELPFUL  |  LEAST HELPFUL
USER RATING
9.3
6 USERS
Quality
Service/Courteousness
Value For Money
9.8
9.2
9.0
Mungalla Rama Krishna on 2nd Apr 2011, 12:47pm | Permalink
I visited this Masjid. Its really a good holly place.
RATING
10
sow on 2nd Jul 2013, 12:11pm | Permalink
can you tell me what are the timings women tourist can visit and any restrictions on clothing and other details please.
Mungalla Rama Krishna on 2nd Apr 2011, 12:57pm | Permalink
Its a great Historical Masjid and its good holly place.
iamang on 13th Jan 2012, 1:00pm | Permalink
On the inside to the left is the shrine of the 6th Nizam -Mir Mahboob Ali khan .
Its said that people who are bitten or cursed by snakes are cured by the caretakers over there..