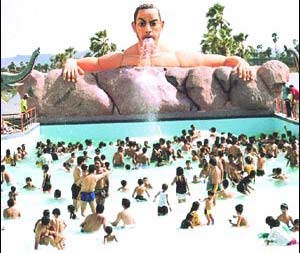 Aishwarya Subramanyam / fullhyd.com
After the hugely hyped opening of Mount Opera with a generous sprinkling of Tollywood stars, you may be expecting quite a lot from the place. After the 40km ride there, you may be expecting more than a lot. And if you've travelled with fidgety annoying screaming children, Mount Opera better be Disneyland. Only it's not. But it's not too bad, either.

The 'multi-theme' park has around 30 rides of varying scream-worthiness, but the most popular are still the merry-go-round, the dodge 'em cars and the Ferris Wheel. Which just goes to show you. If you're not scared of heights and like a leisurely ride, the Ferris Wheel is a must-try; when you're right at the top, you can see Ramoji Film City and acres beyond. A fantastic view, especially at night. Youngsters expecting to be whizzed through the air will be disappointed.

The park also has a very popular wave-pool, with water gushing out of a giant mouth and plenty of laughing children and scolding adults splashing about. And don't forget to visit the world's biggest dinosaur! Oh all right, so it's probably not the world's biggest, but it's quite massive. It's made of fiberglass and looks around grumpily, roaring from time to time. And no, it won't eat you.

To contribute to the general mela air of the place, there are plenty of game stalls around for you to try and win electronic items of dubious make. Music events are held at the park from time to time, and plans are also on to create avenues for adventure-sports enthusiasts, with the introduction of rappelling and rock-climbing. Now if only that Ferris Wheel would go a little faster.
Share. Save. Connect.
Tweet
MOUNT OPERA (TOURIST SPOT) SNAPSHOT
EVENTS AT MOUNT OPERA (TOURIST SPOT)
There are no events at Mount Opera (Tourist Spot) scheduled currently.
MOUNT OPERA (TOURIST SPOT) USER REVIEWS
Be the first to comment on Mount Opera (Tourist Spot)! Just use the simple form below.
LEAVE A COMMENT
fullhyd.com has 700,000+ monthly visits. Tell Hyderabad what you feel about Mount Opera (Tourist Spot)!
RELATED LISTINGS
Countryside Resorts
Aziznagar-Nagireddyguda village, Chilkur/Vikarabad Road, Moinabad Mandal, Ranga Reddy
Lahari Resorts
Bhanoor, Near Patancheru, Hyderabad, Patancheru
SEARCH YELLOW PAGES
Dissatisfied with the results? Report a problem or error, or add a listing.
ADVERTISEMENT
SHOUTBOX!
{{todo.name}}
{{todo.date}}
[
ip{{todo.ip}}
]
{{ todo.summary }}... expand »
{{ todo.text }} « collapse
First  |  Prev  |   1   2  3  {{current_page-1}}  {{current_page}}  {{current_page+1}}  {{last_page-2}}  {{last_page-1}}  {{last_page}}   |  Next  |  Last
{{todos[0].name}}

ADVERTISEMENT
This page was tagged for
nightjobinhayathnagar
address of mount opera hyderabad
mount opera hayath Nagar
hayath nagar near by visiting places
mount opera rates in hayathnagar
Follow @fullhyderabad
Follow fullhyd.com on
About Hyderabad
The Hyderabad Community
Improve fullhyd.com
More
Our Other Local Guides
Our other sites
© Copyright 1999-2009 LRR Technologies (Hyderabad), Pvt Ltd. All rights reserved. fullhyd, fullhyderabad, Welcome To The Neighbourhood are trademarks of LRR Technologies (Hyderabad) Pvt Ltd. The textual, graphic, audio and audiovisual material in this site is protected by copyright law. You may not copy, distribute, or use this material except as necessary for your personal, non-commercial use. Any trademarks are the properties of their respective owners. More on Hyderabad, India. Jobs in Hyderabad.