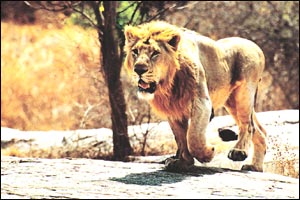 Priyanka Pulla / fullhyd.com
Don't look at this as the customary tourist's visit to the city zoo, as you would in any other big town. While every metropolis the world over has one of its own, Hyderabad's Nehru zoological Park happens to be a major leaguer. Apart from being one of the largest in Asia, it is THE largest zoo in India. Also, it was the first in India to open a Lion/Tiger Safari and a nocturnal animals park. And that means it can be an interesting place for serious adults as well, apart from popcorn-chomping, feather-hatted children on school-sponsored picnics.

The flea-market like hubbub at the entrance belies the verdant 300-acre park that sprawls beyond. Accosting you are vendors selling everything from doorbeen (binoculars) to imitation candy, as well as beggars who want their alms. But once you are in, you'd better be well-nourished, because only a 3-4 hour walk all around can do justice to the myriad animal enclosures. About 80 species and 1,500 animals have this zoo as their home.

The ganglions around which the rest of the zoo swims are the nocturnal park, lion safari, reptile park, aquarium and arboreum. A good way to cover the campus is to find your way from one of these to another, and stop by to take a peek at the fauna on the pathside. Remember, though, that this is an Indian zoo, and if you've been listening for any length to Maneka Gandhi's rantings, you won't be too surprised by some of the flea-infested animals or the scummy ponds in the enclosures.

The nocturnal enclosure happens to be a spooky and musty place, and the animals inside will really give you the creeps. Slender Loris staring back as the keeper shines a torch onto their faces, plam civets, owls, nightjars and many more creatures stare alertly at you as you walk through the eerily moonlit interiors. The horror show effect is made worse by the chain curtains to keep bats from moving from one section to another. You have the admit the place has a new stink in every section, and the occasional blow fan on your face in the darkness only stuffs the icky smell higher up your nostrils. The number of exquisite animals on display, though, is fascinating, and kind of makes up for it.

The Lion Safari, at no. 2, is a fun and bracing ride. You won't be disappointed by the mere 25 minutes even you have been weaned off Kenyan Safari movies. It actually is a Safari, that takes you up thickly forested and rocky hills past freely roaming lions, tigers, deer, neelgai, snakes, bears and butterflies. You can spot a lion staring at you sleepily like a sunbather on the beach. Or a Royal Bengal Tiger twitching its ears and tail nervously. They seem used to the growling buses loaded with humans passing by everyday. You are bound to wonder when their learning curve will allow them to figure out a way to get at the staring people inside.

Bears will paw the wrought iron grill windows and butterflies will flit past. On the whole, it's a great job of a Safari for a regulated environment like the zoo. At the highest point you will see a vista of Hyderabad, and the ride on the whole is a view of the Hyderabadi terrain like it would have been 400 years ago.

The arboreum has low cages filled with parakeets and pigeons, as well as a large dome-shaped enclosure for storks, pelicans and hornbills. And the reptile park has everything from king cobras to monitor lizards, and if you stay long enough, for a treat, you might catch a couple of star tortoises in the act! Of course, you have to have done your homework with Discovery to realise that the slow and sleepy movement is actually of a turtle in the throes of an orgasm. Yes, for the perverted bugs in the population, the zoo has plenty of raunch too.

Then there are the gentle and homely looking hippos and elephants, moving around showily as if trying purposely to be amusing. And the one-horned rhinoceros that pees like a mountain river. The posterboys of the megafauna - leopards, cheetahs, furry hyenas and apes - are obviously also on display.

Finally there is the zoo canteen, the most people-infested area, that really looks like a garbage bin with the multi-colored people, mostly from the old city, milling around, a huge change from the earthy animals. And they add enthusiastically to the litter with their empty bottles and wrappers.

A word of caution: you might prefer to go dehydrated than use one of the pay-and-use toilets here. The stink is much worse than of animal excretae from the enclosures.

Well, that's about it. All in all, it sure is a fantastic zoo. Keep your eyes and ears open while you go around, and apart from enjoying yourself, you will pick up a healthy understanding of your animal friends too.
Share. Save. Connect.
Tweet
NEHRU ZOOLOGICAL PARK SNAPSHOT
EVENTS AT NEHRU ZOOLOGICAL PARK
There are no events at Nehru Zoological Park scheduled currently.
NEHRU ZOOLOGICAL PARK USER REVIEWS
1 - 2 OF 2 COMMENTS
POSITIVE  |  NEGATIVE |  NEWEST  |  OLDEST  |  MOST HELPFUL  |  LEAST HELPFUL
USER RATING
7.3
6 USERS
Visual Impact
Serenity
Cleanliness
8.0
7.5
6.0
Raza on 18th Dec 2008, 7:54pm | Permalink
For the map of the zoo and some awesome photos from the hyderabad zoo, visit the zoo website:


Pros: nice green area in the city
Cons: no where close to international standards

ADVERTISEMENT
This page was tagged for
hyd zoo park telephone
nehru zoological mobileno
nehru zoological park hyderabad phone numbers
nehru zoological park near mmts station
bahadurpura zoo park
Follow @fullhyderabad
Follow fullhyd.com on
About Hyderabad
The Hyderabad Community
Improve fullhyd.com
More
Our Other Local Guides
Our other sites
© Copyright 1999-2009 LRR Technologies (Hyderabad), Pvt Ltd. All rights reserved. fullhyd, fullhyderabad, Welcome To The Neighbourhood are trademarks of LRR Technologies (Hyderabad) Pvt Ltd. The textual, graphic, audio and audiovisual material in this site is protected by copyright law. You may not copy, distribute, or use this material except as necessary for your personal, non-commercial use. Any trademarks are the properties of their respective owners. More on Hyderabad, India. Jobs in Hyderabad.