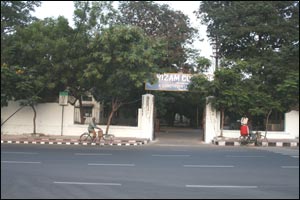 C Venkatesh / fullhyd.com
Whether or not it's true that the buildings were once the stables for the elephants of the Nizam, the alumni of Nizam's have certainly gone on to achievements of truly mammoth proportions.

Remember when the MCC was the English National Cricket team? That's roughly what the equation used to be between the Hyderabad Ranji Trophy team and the Nizam College Cricket team. An alumni meeting would be an autograph hunter's dream come true. Ghulam Ahmed. M L Jaisimha. Abbas Ali Baig. Azharuddin.

A lot of students have passed through the soaring building that houses the Principal's Office, sweating with trepidation, certificates in hand, hoping for the admission call. Admission to the Nizam College is not easy, what with 85% of the seats being reserved for "locals" (which term is defined in excruciating legalese in the prospectus) with further sub-divisions for various categories. But once you've gained admission, you'll get first hand experience of laissez faire education in action.

The college has long been known as a libertarian stronghold, roughly like Delhi's JNU. That reputation has been earned over the centuries literally, since the Nizam's was started in 1887. And is jealously guarded today over countless cups of chai and cheap cigarettes at the college canteen, as well as in the several and vigorous cultural activities that liberally decorate the calendar.

Just as the flourishing sports and cultural activities have provided a springboard for countless students to launch themselves in various wakes of life, the College Union elections have also provided the first test for several future political leaders. In fact, the college campus brings to mind the Indian political scene: dusty expanses, neglected undergrowth, and the occasional towering tree.

Whether youre an aspiring student, a hopeful parent, or a visiting tourist, a walk through the campus is an interesting experience. Its a good idea to start at the main entrance, near the two cricket "stadia". The first is for the informal games where the long leg in game is simultaneously leg slip in another. Beyond this is the second, the Real McCoy. An unpretentious pavilion is all that marks past champions and heralds future superstars. Stop by the canteen for a cuppa, and youll hear occasional scattered cheers or curses: any match is guaranteed to attract an audience.

Several of the buildings are heritage structures, and are fairly well-preserved. Graffiti and political banners have, thankfully, been kept away from the main building. Loop around the strangely named "Students Toilet Block For Gents", down the long steps that lead you to the English Language Training Center and back to where you started.

ADVERTISEMENT
This page was tagged for
nizam collage phone number
basheer bagh nizam college
nizam college basheerbagh college code
nizam medical college for genetics map
raghvendra diwan hyderabad leader
Follow @fullhyderabad
Follow fullhyd.com on
About Hyderabad
The Hyderabad Community
Improve fullhyd.com
More
Our Other Local Guides
Our other sites
© Copyright 1999-2009 LRR Technologies (Hyderabad), Pvt Ltd. All rights reserved. fullhyd, fullhyderabad, Welcome To The Neighbourhood are trademarks of LRR Technologies (Hyderabad) Pvt Ltd. The textual, graphic, audio and audiovisual material in this site is protected by copyright law. You may not copy, distribute, or use this material except as necessary for your personal, non-commercial use. Any trademarks are the properties of their respective owners. More on Hyderabad, India. Jobs in Hyderabad.