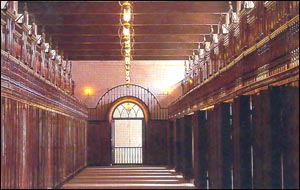 Ayanti Guha / fullhyd.com
It takes quite some time to get to the haveli. The hustle-bustle of the crowded city sort of slows you down. So much that when you finally get there, you are expecting - what else, a haveli of course! Only, it is a decidedly European sight that greets you.

With marble cherubs adorning fountains, trellised arbors and tree-lined avenues, Purani Haveli is a relic of the Nizams. Built during the reign of the Asif Jahis, this palace of sorts has seen the birth and death of a dynasty. And now the very stones narrate the story.

Earmarked initially as an estate for the Hazrat Mir Momin, Mohammad Quli Qutub Shah's Chief Adviser and peshwa, the haveli was over passage of time turned into a museum, and with ample amount of space remaining, a school and college sprung up there as well. It is today one of the most eye-catching structures in Hyderabad, and is a lovely blend of European and Indian architecture.

Stepping inside the haveli, you find the original old mosaic tiles that have felt the tread of generations of Nawabs and now lead you to the very rooms where history unfolded. The courtyard is a breath of fresh air. It has wide open spaces and trees as far as the eye can see. And the eye beholds a U-shaped single-storeyed central building flanked by two double-storeyed oblong wings nearly 1,000 feet apart! No scope for claustrophobia here, folks.

This residence of the Nizams was converted into a museum, with the VII Nizam's collection of gifts made to him on the occasion of his silver jubilee on the throne making up most of the artifacts displayed. They ought to catch your attention for about an hour or so. This museum is a poor relation of the Salarjung - which is NOT to be missed on a trip to Hyderabad.

Onto the school and college now. Guess where they are? Why, down in the stables naturally. Hold on, the horses are long gone. Hmm... does the smell of horses and hay ever waft by, though?

The charm of the Purani Haveli lies in the fact that things are still practically in toto the way they were in an earlier era. Imagine going to a school where you go from one class to another under huge arches and large domes, and through unending corridors. The incongruent elements (like a basketball court just opposite the fountain-adorned garden) seem to melt away once you come to terms with the fact that change is one thing that Hyderabadis are very capable of shouldering. They can take Nawabi andaaz side by side with gen X attitudes. Although it may be slightly disconcerting to students to have tombs here and there in their playground.

ADVERTISEMENT
This page was tagged for
purana haveli in mumbai
www. 1000 purana haveli
address of purana haveli
Purani Haveli Mumbai
purani haveli hyd address
Follow @fullhyderabad
Follow fullhyd.com on
About Hyderabad
The Hyderabad Community
Improve fullhyd.com
More
Our Other Local Guides
Our other sites
© Copyright 1999-2009 LRR Technologies (Hyderabad), Pvt Ltd. All rights reserved. fullhyd, fullhyderabad, Welcome To The Neighbourhood are trademarks of LRR Technologies (Hyderabad) Pvt Ltd. The textual, graphic, audio and audiovisual material in this site is protected by copyright law. You may not copy, distribute, or use this material except as necessary for your personal, non-commercial use. Any trademarks are the properties of their respective owners. More on Hyderabad, India. Jobs in Hyderabad.