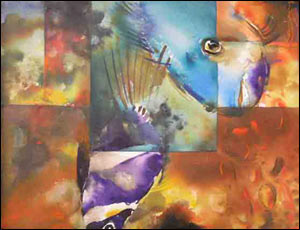 Amulya Rajan / fullhyd.com
Firstly, remember to take an appointment. Secondly, remember not to gasp. This is a studio which, leave alone artists, even art lovers would have dreamed about in their earliest infantile dreams.

But again - don't you, in all your enthusiasm, dare to step into this sanctuary without an appointment. For, Mr. Suresh does not tolerate any unruliness of this kind. You will be thrown out mercilessly.

An artist for almost 25 years now, Stanley Suresh loves his space and, as a result, solitude. He spends hours alone in his studio, and that's what gives him the ultimate fulfillment. Though he has a wife and two children, his studio is his actual mate, and his paintings, his real children.

Blessed by destiny and talent all his life, Suresh's high points have been the letter written to him by Mother Teresa in her own hand, and the inauguration of his first exhibition by former Prime Minister Rajiv Gandhi. And ever since then, life has been one long summer holiday for him. He paints what catches his eye, and people pay gargantuan amounts for his perspective.

Suresh has a style, very capturing and unique. The colors he uses are always vibrant and ecstatic. A tuneful combination of abstraction and pragmatism, his paintings have a life-giving melody lingering in all of them.

He has separate rooms for the creative works and the realistic ones, to avoid any kind of internal sparring. The realistic includes anything from a portrait to a landscape; anything that is derived more from the outside world than his own internal one. The creative works are projections of his thoughts, beliefs and ideas, on paper.

The most common object in all his creative works is the nude female. It is his belief that the female form is the most beautiful ever created. And nudity, though you might think otherwise, represents the purity of his mind. Hence, this form is the culmination of truth and beauty. Though I'm sure Freud would have differed with his views.

Some of his works are called Ecstasy, Made For Each Other, Unfulfilled Desires, Monsoon, Gathering, Affection and On A Rainy Day. And some of his major triumphs are:

Work in the direction of three Telugu films - Ganesh, Antahpuram and Seenu

A documentary made on his life by the ZDF TV Team, Germany, 1991

Jugalbandi with Hariprasad Chaurasia (painting and flute) at the Suramandal Silver Jubilee Celebrations, 1993

ADVERTISEMENT
This page was tagged for
www.m.d.r .36b road rajand com
stanley suresh artist suspended
anitha suresh stanley
stanley suresh paintings
Jubilee Hills Commercial Artists And Designers
Follow @fullhyderabad
Follow fullhyd.com on
About Hyderabad
The Hyderabad Community
Improve fullhyd.com
More
Our Other Local Guides
Our other sites
© Copyright 1999-2009 LRR Technologies (Hyderabad), Pvt Ltd. All rights reserved. fullhyd, fullhyderabad, Welcome To The Neighbourhood are trademarks of LRR Technologies (Hyderabad) Pvt Ltd. The textual, graphic, audio and audiovisual material in this site is protected by copyright law. You may not copy, distribute, or use this material except as necessary for your personal, non-commercial use. Any trademarks are the properties of their respective owners. More on Hyderabad, India. Jobs in Hyderabad.