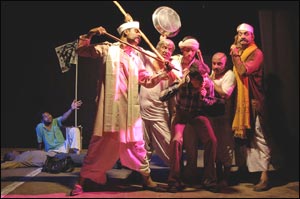 Shantan Reddy / fullhyd.com
Sutradhar is credited with its serious theater enthusiast and guiding voice, Vinay Verma, whose impressive credentials include parts in several English, Telugu and Hindi plays, television and movies, and in several ads. He has done voice-overs for major stars like Tinnu Anand and even Chiranjeevi. And his able counterpart, Prof. Bhaskar Shewalker, is a former Head of the Department, Theater Arts, S N School of Performing Arts, University Of Hyderabad, with 40 years of theater experience. And he's directed 90 plays, too.

Sutradhar is primarily a casting agency, and seeks to provide placement to people in all fields connected to theater, television and movies. It also directs plays, and offers voice and acting workshops. The duo view themselves as guides, and hope to bring out the talents within their proteges, by taking in small groups and specialising in personal attention and problem-specific guidance.

The students here are a satisfied lot, and have only good things to say about Sutradhar. They feel their confidence as actors has grown immensely and has helped them perform better in subsequent placements.

ADVERTISEMENT
This page was tagged for
sutradhar school
sutradhar, vinay varma
sutradhar school of acting timings
sutradhaar vinay verma
pratham sutradhar + school level dance
Follow @fullhyderabad
Follow fullhyd.com on
About Hyderabad
The Hyderabad Community
Improve fullhyd.com
More
Our Other Local Guides
Our other sites
© Copyright 1999-2009 LRR Technologies (Hyderabad), Pvt Ltd. All rights reserved. fullhyd, fullhyderabad, Welcome To The Neighbourhood are trademarks of LRR Technologies (Hyderabad) Pvt Ltd. The textual, graphic, audio and audiovisual material in this site is protected by copyright law. You may not copy, distribute, or use this material except as necessary for your personal, non-commercial use. Any trademarks are the properties of their respective owners. More on Hyderabad, India. Jobs in Hyderabad.