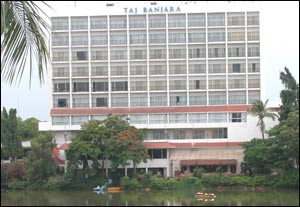 Devyani Srivastava / fullhyd.com
The Taj Group proclaims itself "a symbol of Indian hospitality". Taj Banjara (one of the three Taj Hotels properties in Hyderabad) does not deviate from the norm. The uniformed doorman smiles with his eyes as he ushers you in through the hotel's thick glass doors; the housekeeping staff is appropriately unobtrusive, discreet, but ever ready the moment you need them.

Where Taj Banjara seems to part with tradition is in its opulence; this particular hotel is far less extravagant than the other Taj Hotels, and even other 5-star properties, in Hyderabad and Secunderabad. To begin with, the white building itself looks unimpressive; it lacks the character one expects from a Taj Hotel.

Internally, too, it has none of the regality and the sheer plushness of Taj Krishna, to the effect that Banjara seems a distant and rather poor cousin of Krishna, the latter being the clear jewel in the company's 'Taj' in Hyderabad. True - Taj Banjara is not a luxury property like the Krishna, but even Taj Deccan, a business property in Hyderabad, holds its own against the might of Krishna's swank.

Outside the realm of its territorial competitors, 29-year-old (in 2007) Taj Banjara, whose owners have come and gone, is also fighting a losing battle against the Hyderabad Marriott, whose muscle as a business property outweighs that of Taj Banjara, even though Marriott is relatively in its infancy. By itself, Marriott's business center is truly world-class; compared to Taj Banjara's modest one, it seems much bigger, better.

Perhaps Taj Banjara's only saving grace in its league is Anjuman, a collection of three halls ideal for corporate consumption (wedding receptions, too). The buildings of the Marriott and Taj Banjara house seven and eight floors, respectively, but Taj Banjara's 122 rooms pale in comparison to Marriott's booty: 297 rooms.

Comparative analyses aside, Taj Banjara does work as a 5-star business property, especially for those that it has been created for - executives and corporates from the world over. Its limited confines contain all the necessary trimmings and indulgences, though they all seem rather puny, undersized.

The small-ish but clean swimming pool, brimming to the top with blue, overlooks the government-owned (but hotel-managed) Banjara Lake on one side and the paltry hotel lawns on the other.

Inside and upstairs, the fitness center is again small, but it flaunts the latest in terms of equipment. It also keeps its doors open 24 hours, and also has a professional trainer whose services the guests can avail themselves of. The charming and well-lit beauty salon, complete with a barber's shop, operates next door - and they are reportedly thoroughly professional.

On the ground level, adjacent to the lobby, lie two small-scale stores the 30-year-old Humayun (which mostly sells decorative antiques; its sophisticated blue china collection is remarkable), and Krishna Pearls, which sells (surprise!) jewelry. The shops are not very spacious, and resultantly their stock is limited, but they always seem to have a customer or two.

Taj Banjara's rooms and suites are comfortable, endowed with all the expected conveniences. If you plan on staying indoors for a large part of your stay, reserving a room with an even number at the end is a good idea; they all offer panoramic views of the lake, and of Hyderabad beyond. Windows in rooms with an odd number at the end open onto the hotel grounds, which is a pleasant sight because the grounds are lush and green all year round.

In the wining and dining department, Taj Banjara's restaurants offer a limited selection of cuisine for different folks; the only unifying pre-requisite is that you have to be Mr. or Ms. Moneybags to be able to afford the tab. Strings specialises in Chinese and Thai cuisine, and serves lunch and dinner, while Kebab-E-Bahar opens only at 5:30pm and serves delectable Indian dinner, especially fresh, char-grilled kebabs, a hot favorite.

The Waterside Cafe, with its picture postcard perfect views of Banjara Lake, is next to the lobby, and abuzz 24 hours. You will find many monkey suits here, especially during breakfast (buffet) and dinner hours, striking deals in hushed tones.

Underdeck, Taj Banjara's pub, is designed to resemble a boat, and is a hit particularly with the city's hip, and rich, tipplers. Taj Banjara also sells liquor at a bar in its lobby. A tiny cake shop runs out of there, too; the dark chocolate pastries are divine.

ADVERTISEMENT
This page was tagged for
the lawns taj banjara location map
Www.nelavenl.Bathukam. Krishna. Swanka
E- mail address of taj banjara hyderabad
taj banjara and taj krishna owners
Taj banjara
Follow @fullhyderabad
Follow fullhyd.com on
About Hyderabad
The Hyderabad Community
Improve fullhyd.com
More
Our Other Local Guides
Our other sites
© Copyright 1999-2009 LRR Technologies (Hyderabad), Pvt Ltd. All rights reserved. fullhyd, fullhyderabad, Welcome To The Neighbourhood are trademarks of LRR Technologies (Hyderabad) Pvt Ltd. The textual, graphic, audio and audiovisual material in this site is protected by copyright law. You may not copy, distribute, or use this material except as necessary for your personal, non-commercial use. Any trademarks are the properties of their respective owners. More on Hyderabad, India. Jobs in Hyderabad.