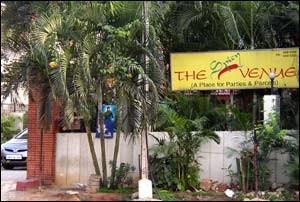 EDITOR RATING
8.0
Food
Service/Courteousness
Ambience
Value For Money
8.0
7.0
7.5
8.0
Suggestions
Good for date/family
NA
Easy parking
NA
Long waiting
NA
The Scene
Spicy Venue is located in the heart of Jubilee Hills - which, for most Hyderabadis, can mean anything, since nobody really knows where Jubilee Hills starts or ends, and, many times, how to get out of it (we at fullhyd.com take a compass and a prayer book with us). To add to your woes, Spicy Venue is located in a residential locality, which means that if you are lost, you have to knock on someone's door and ask "where am I", which, ranked on profundity, comes next only to "who am I".

Once in, however, this bungalow converted to a restaurant can soothe and feed you at relatively compassionate prices. The interiors are standard, and the place, thanks to a rather airy layout, can seat about 40 at a time, which means sometimes you may need to wait. Fortunately, the serenity of interior Jubilee Hills is better to do that at than the 3rd degree pollution rush outside Chutney's (where all of us will have waited at some point of time before we die).

The Food
Spicy Venue is not altogether as spicy as its logo promises, but then nothing expensive really is - ask the people who eat at Rayalaseema Ruchulu, which sports 2 chillis in its logo against Spicy Venue's 1. The people who can eat the really spicy Andhra cuisine, unfortunately, cannot afford it here. Conversely, if you can afford it here, you probably cannot eat all that you want to. The restaurant probably found out the hard way.

There's a lot of traditional Andhra non-veg stuff nevertheless, including mouth-watering names like Natu Kodi Iguru, Chapala Pulusu, Kodiguddu Ulli Iguru, Ulavacharu and Mamsam Pulusu, which the restaurant counts among specialities. There's a pretty elaborate North-Indian/Chinese menu otherwise too, with all the standard soups, starters, rice items, noodles and curries. And a veg. thali for Rs. 95 is paisa vasool.

Spicy Venue expectedly is big on home delivery, given its location in an upmarket residential neighbourhood. Delivery is free until 3km, available for Jubilee Hills, Kavuri Hills and Film Nagar.

The Verdict
Spicy Venue is a good option for people staying in the neighbourhood. Just remember what we said about that spicy bit.

ADVERTISEMENT
This page was tagged for
spicy venue hotel telephone nos banjara hills
the spicy venue hyderabad
natu kodi pulusu hotels in dilsukhnagar
the spicy venue jubilee hills
spicy venue jubilee hills for homedelivery
Follow @fullhyderabad
Follow fullhyd.com on
About Hyderabad
The Hyderabad Community
Improve fullhyd.com
More
Our Other Local Guides
Our other sites
© Copyright 1999-2009 LRR Technologies (Hyderabad), Pvt Ltd. All rights reserved. fullhyd, fullhyderabad, Welcome To The Neighbourhood are trademarks of LRR Technologies (Hyderabad) Pvt Ltd. The textual, graphic, audio and audiovisual material in this site is protected by copyright law. You may not copy, distribute, or use this material except as necessary for your personal, non-commercial use. Any trademarks are the properties of their respective owners. More on Hyderabad, India. Jobs in Hyderabad.