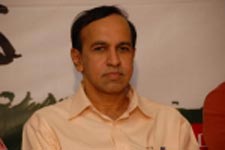 [This is a sponsor message]

Uday is an engineering graduate who has worked in diverse global environments in various capacities, in the field of Information Technology. His first love, however, has always been voice-over. His voice-over skills, including the tone of his voice, as well as his pronunciation, have taken him places.

Comfortable with international projects and global voice requirements, Uday has a voice that also suits newscasting. He is good at both Indian & international accents.

He has worked on some prestigious projects for both government and non-governmental organizations in India and abroad, including EMMRC (formerly CIEFL) and UNICEF. Some of his documentaries that were aired on the national TV networks are Dhaulagiri (EMMRC), Chandragiri (EMMRC), Home Away (EMMRC), The Land Of The Gonds (EMMRC) and Voices of Progress (UNICEF).

Apart from voice-over skills, Uday is also good at writing, and has contributed articles to some leading newspapers and magazines. He, however, concentrates on documentaries. Any script sent to him in advance undergoes due diligence by him, with value-additions that include punch-lines and language and grammar enhancements. Recording starts once the edited script is cleared by his client.

He does not consider geographic location as a constraint, and will travel any distance to finish a project that interests him.

ADVERTISEMENT
This page was tagged for
dubbing artist auditions in Hyderabad
dubbing in movies consultancy hyderabad
uday sabhis voice over artist
voice over artists opurtunities in hyderabad
voice over training hyd
Follow @fullhyderabad
Follow fullhyd.com on
About Hyderabad
The Hyderabad Community
Improve fullhyd.com
More
Our Other Local Guides
Our other sites
© Copyright 1999-2009 LRR Technologies (Hyderabad), Pvt Ltd. All rights reserved. fullhyd, fullhyderabad, Welcome To The Neighbourhood are trademarks of LRR Technologies (Hyderabad) Pvt Ltd. The textual, graphic, audio and audiovisual material in this site is protected by copyright law. You may not copy, distribute, or use this material except as necessary for your personal, non-commercial use. Any trademarks are the properties of their respective owners. More on Hyderabad, India. Jobs in Hyderabad.