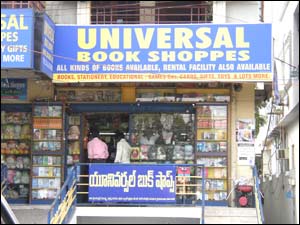 With its Sure brand of books, Universal sure has established a formidable reputation as a one-stop-shop for both first and second hand textbooks. A recent fullhyd.com survey indicates that about 98.73% of people in the age group 16-24 in Andhra Pradesh invest blood, sweat, toil and tears into trying to crack medicine and engineering entrance exams. About 1.27% don't make it, but by the time you finish reading this sentence, a new engineering college would have opened, so it falls to 1.26%.

About half of the 1.26% attempt suicide. Half of those who attempt it fail, and half of those start dotcoms. Thankfully for us, there aren't any books on starting dotcoms at Universal (the only book they have on entrepreneurship can put an insomniac to sleep). Instead, Universal only sells "Computer, Medicine, Engineering, Management, MCA, MBA, Inter, Degree and EAMCET" books. Whew!

Universal has moved from its old home adjacent to Minerva in Ameerpet to a smaller location opposite the S R Nagar bus stop, on the main road going towards Erragadda. The main Universal store is of course in Koti, where the giants such as Central Publishers reside. This main store is the grand temple to textbooks alone, but the Ameerpet location seems to have succumbed to the temptation of stocking unattractive trinkets (read "novelty and gift items").

Yes, instead of sticking to its core competency, i. e. textbooks, Universal is wasting precious retail space on baubles (the thick layers of dust on these suggest that no one buys them anyway.) The same space could be more effectively used to display the books in aisles and allowing readers to browse. This would lend a more modern look and feel to the very traditional "are-you-being-served?" model of the store.

However, the customers don't really seem to care about such peripherals. They know this is one store where you can get what you need, and that is reason enough for them to patronize it. And the store is open all days of the week, which is a blessing for those who remember to buy the relevant textbook the night before a do-or-die Monday morning exam. And that includes you.
Share. Save. Connect.
Tweet
UNIVERSAL BOOK SHOPPE SNAPSHOT
EVENTS AT UNIVERSAL BOOK SHOPPE
There are no events at Universal Book Shoppe scheduled currently.
UNIVERSAL BOOK SHOPPE USER REVIEWS
1 - 1 OF 1 COMMENTS
POSITIVE  |  NEGATIVE |  NEWEST  |  OLDEST  |  MOST HELPFUL  |  LEAST HELPFUL
USER RATING
8.0
1 USER
Quality
Ambience
Service/Courteousness
Value For Money
10.0
7.0
7.0
10.0
Pari on 5th Apr 2009, 1:07pm | Permalink
Its a good place 2 find books fr all the competitive
exams but then its way too crowded half the time !! It'd be nice if they replaced the stationery section n notebooks section with books n devote the whole shop for books only !!

ADVERTISEMENT
This page was tagged for
universal book store secunderbad
text books stores in hyd
universal book shoppe
golden stationery shop. sanjeeva Reddy Nagar hyderabad
best compititive books stall in hyderabad
Follow @fullhyderabad
Follow fullhyd.com on
About Hyderabad
The Hyderabad Community
Improve fullhyd.com
More
Our Other Local Guides
Our other sites
© Copyright 1999-2009 LRR Technologies (Hyderabad), Pvt Ltd. All rights reserved. fullhyd, fullhyderabad, Welcome To The Neighbourhood are trademarks of LRR Technologies (Hyderabad) Pvt Ltd. The textual, graphic, audio and audiovisual material in this site is protected by copyright law. You may not copy, distribute, or use this material except as necessary for your personal, non-commercial use. Any trademarks are the properties of their respective owners. More on Hyderabad, India. Jobs in Hyderabad.