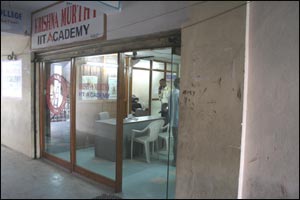 Ramakant D S / fullhyd.com
The pangs of divorce are painful. Especially when the marriage lasted for more than 9 years. After the turn of events that resulted in a vertical split in Mega Study Circle in 2003, M/s Krishnamurthy and Co. packed their bags and moved to nearby Windsor Plaza and established their shop under the new banner, V Study Circle, while Mega Study Circle became Sri Mega Study Circle.

For those unfamiliar with Krishnamurthy, he is the second most popular name in IIT-JEE coaching in town (until FIIT-JEE takes over). The most popular, of course, is Ramayya, the seasoned and hugely popular pedagogue who sends about 100 kids to India's engineering temples each year. While Ramayya inherited his brand of gruel from APRJC (Nagarjuna Sagar), known for brutally churning out Intermediate toppers for several years with its military regimen, Krishnamurthy was a popular math don at an equally assembly line institute for producing toppers, Little Flower Junior College. Both APRJC and LFJC don only shadows of their once luminary status now, but Ramayya and Krishnamurthy went from strength to strength on their own.

In retrospect, Mega Study Circle could easily have been Hyderabad's best IIT-JEE institute (a mantle that has been held for decades by Ramaiah's classes which send 50-150 students there every year from just Hyderabad). But that is similar to saying Devdas would have won the Oscar had Shah Rukh acted. Mega Study Circle certainly had good faculty and administration. However, that relation didn't last long. Now Krishnamurthy runs V Study Circle along with Vishwanath.

ADVERTISEMENT
This page was tagged for
reviews krishnamoorthy junior college
best coching centers in nagarjun sagar APRJC
APRJC coaching centers in nagarjunsagar contact number
V Study Circle
V krishnamurthy study circle,S.R.Nagar
Follow @fullhyderabad
Follow fullhyd.com on
About Hyderabad
The Hyderabad Community
Improve fullhyd.com
More
Our Other Local Guides
Our other sites
© Copyright 1999-2009 LRR Technologies (Hyderabad), Pvt Ltd. All rights reserved. fullhyd, fullhyderabad, Welcome To The Neighbourhood are trademarks of LRR Technologies (Hyderabad) Pvt Ltd. The textual, graphic, audio and audiovisual material in this site is protected by copyright law. You may not copy, distribute, or use this material except as necessary for your personal, non-commercial use. Any trademarks are the properties of their respective owners. More on Hyderabad, India. Jobs in Hyderabad.