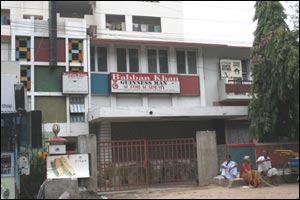 Shantan Reddy / fullhyd.com
One stairway, one room, and about a thousand pictures and articles about a man in a black sherwani, a tiffin carrier and a black umbrella who's posing in front of the Pyramids, the Eiffel Tower, the Leaning Tower Of Pisa and the Sydney Opera House, to name a few.

His is a story that could live eternally for its bravery, passion and wonderful achievements that he considers just bystanders in an intense love affair spanning four decades.

No, there's nobody in Hyderabad who doesn't know Babban Khan and his Adrak Ke Panje.

Growing up in penury in the streets of Aghapura, Babban Khan overcame the personal tragedy of losing his siblings to malnutrition, and wrote Adrak Ke Panje (the claws of ginger), a solo act, first performed at Ravindra Bharati in 1965.

It met with failure. Which makes its remarkable success that much more copy-worthy.

He decided to follow his dreams nevertheless, and persuaded his sponsors to give it just a few more trials. The "fews" became 10,175. The play ran in over 60 countries in 27 languages and over 42 years, and was - is - recognised by the Guinness Book as the longest running single man show.

An extremely private man content with his life, Babban Khan now resides in the city he loves, at Masab Tank, giving to the people the gift he says God gave him. He takes on two or three students at a time, teaching them one-on-one for an hour everyday. Courses last 2 to 3 months, and the student receives a diploma that states that he is a Babban Khan trainee.

ADVERTISEMENT
This page was tagged for
Babban Khan phone number
babban khan hyderabad adrak ke panje
babban khan adrak ke panje vedio
devadas kanakala acting school
babban khan adrak panja where he live present also family present
Follow @fullhyderabad
Follow fullhyd.com on
About Hyderabad
The Hyderabad Community
Improve fullhyd.com
More
Our Other Local Guides
Our other sites
© Copyright 1999-2009 LRR Technologies (Hyderabad), Pvt Ltd. All rights reserved. fullhyd, fullhyderabad, Welcome To The Neighbourhood are trademarks of LRR Technologies (Hyderabad) Pvt Ltd. The textual, graphic, audio and audiovisual material in this site is protected by copyright law. You may not copy, distribute, or use this material except as necessary for your personal, non-commercial use. Any trademarks are the properties of their respective owners. More on Hyderabad, India. Jobs in Hyderabad.