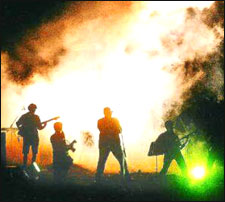 Ramakant D S / fullhyd.com
Rock bands give and take from other bands. Anthrax and Metallica frequently exchanged their music gears till Metallica hit big-time. It was rumored that the members of The Beatles used to share wives/girlfriends for one-night stands. Back home the camaraderie is quite infectious. And the decision to form a band in another band's show required that one giant leap.

Solomon, Sandeep, Paul, Tony and Moe took that jump at Sledge's concert and landed on "The Dark Side Of Death". Besides, Solomon and Prabhu have their own music school "Allegro" at Himayatnagar. Inspired by heavy metal bands such as Sepultura, Slayer, Six Feet Under, Metallica and Motorhead, these guys fire with all guns blazing.

The members started to jam at the place of Solomon (the drummer), and on the equally metal-headed advice of Sledge's Avinash and Prabhu, they christened themselves Bloodmaze. Accompanying are Sandeep (lead guitar), Tony (bass guitar), Moe (vocals) and Paul (guitars).

Very rarely do the words "heavy metal band" accompany heavy weight members. Apart from Paul and Moe, the rest of the gang look very similar to henchmen of the '60s Telugu movies. Appearances aside, Bloodmaze have performed up to 10 shows in 2003-04, and are raring for more. Check them out at www.bloodmaze.cjb.net

Psst... heard on the streets: "These guys play cool stuff, but have to work hard to compete on the national circuit."
Share. Save. Connect.
Tweet
BLOODMAZE SNAPSHOT
EVENTS AT BLOODMAZE
There are no events at Bloodmaze scheduled currently.
BLOODMAZE USER REVIEWS
1 - 1 OF 1 COMMENTS
POSITIVE  |  NEGATIVE |  NEWEST  |  OLDEST  |  MOST HELPFUL  |  LEAST HELPFUL
kamalbajaj on 15th Apr 2014, 9:26pm | Permalink
For Global opportunities,Join free at this gateway.

ADVERTISEMENT
This page was tagged for
bloodmaze
solomon drums hyderabad
solomon drummer hyderabad
bloodmaze band contact
solomon bloodmaze
Follow @fullhyderabad
Follow fullhyd.com on
About Hyderabad
The Hyderabad Community
Improve fullhyd.com
More
Our Other Local Guides
Our other sites
© Copyright 1999-2009 LRR Technologies (Hyderabad), Pvt Ltd. All rights reserved. fullhyd, fullhyderabad, Welcome To The Neighbourhood are trademarks of LRR Technologies (Hyderabad) Pvt Ltd. The textual, graphic, audio and audiovisual material in this site is protected by copyright law. You may not copy, distribute, or use this material except as necessary for your personal, non-commercial use. Any trademarks are the properties of their respective owners. More on Hyderabad, India. Jobs in Hyderabad.