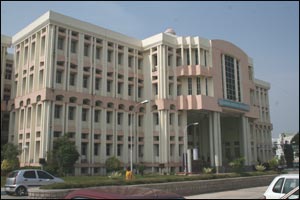 Shantan Reddy / fullhyd.com
When the sign board says Gandhi Medical College "cafeteria" instead of "canteen", and has Vivek Oberoi's cowlicked face screaming "wakaaw" off its walls instead of the badly smudged Silk Smitha poster, you know things are a-changing.

GMC's origins can be traced back to 153 years ago when it was started as a 3-bed infirmary around the same time as its more famous counterpart, the Hyderabad School of Medicine (now Osmania), and has consistently dwelled in its high-domed shadows since.

The average medical student can, at times, feel jailed by the extent of his curriculum, but the AP government has given that a whole new dimension when they decided to build the new GMC in the old Musheerabad Prison premises.

Rs. 80 crores poorer, they recently inaugurated the breath-taking new hospital and college buildings, and the spirit of rejuvenation in the stride of every Gandhian is obvious for everyone to see. "Second best no longer," they seem to walk their thoughts. The hospital is to have all the amenities of a major corporate at government prices. Also associated with the college are some of the city's top teaching hospitals, to train their doctors.

ADVERTISEMENT
This page was tagged for
GANDHI MEDICAL COLLEGE MUSHEERABAD
gandhi medical college adrees
gandhi medical college hyderabad india address
dev ul hassan hospital bhopal address
gandhi medical college adress
Follow @fullhyderabad
Follow fullhyd.com on
About Hyderabad
The Hyderabad Community
Improve fullhyd.com
More
Our Other Local Guides
Our other sites
© Copyright 1999-2009 LRR Technologies (Hyderabad), Pvt Ltd. All rights reserved. fullhyd, fullhyderabad, Welcome To The Neighbourhood are trademarks of LRR Technologies (Hyderabad) Pvt Ltd. The textual, graphic, audio and audiovisual material in this site is protected by copyright law. You may not copy, distribute, or use this material except as necessary for your personal, non-commercial use. Any trademarks are the properties of their respective owners. More on Hyderabad, India. Jobs in Hyderabad.