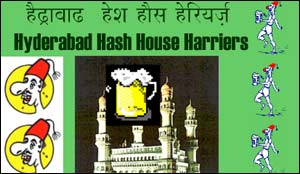 Among the list that comprises my fairly liberal repertoire of self-indulgent activities, if there's one thing I have been accused of not including, it would have to be any kind of organizational allegiance. "Your group has a motto, you say? And a leader? A flag, perhaps? Then get thee behind me!" The preceding monologue would succinctly paraphrase my reaction to solicitation of my patronage to any group of individuals assuming a common identity or rallying behind a leader.

Understandably, you could forgive me my pitiable self-flagellation the morning after a rather indulgent evening, when I discovered that I had, while in the firm but agreeable grip of the crafty Old Monk, submitted to being a part of a clique that brands itself thusly - Drinking People With A Running Problem.

No, not some new age rehabilitation program of Alcoholics Anonymous, I was to realize much to my relief. These are the Hash House Harriers - a ragtag assortment of renegade runners. And walkers.

Keeping alive a tradition started by expatriate Britishers in Malaysia during the war, these are folks you've probably seen around town in the twin cities - a very inclusive and motley crew spanning the spectrum from toddler to grandma, from starving artist to satisfied diplomat. A group that exists for the sole purpose of self-mockery, and to drink beer and have a good time while achieving that laudable purpose.

Getting together every Sunday evening, come rain or come shine, this maverick bunch of men, women, children & dogs (of course, the last two refraining from the intoxicating aspects) assume the roles of hares and hounds, the latter group chasing while the former lays the trail, leaving behind unmistakable marks of where they've been, in the form of industrial strength chalk mark beacons.

Depending upon the extent of one's physical abilities or just one's willingness (or lack thereof) to subject one's limbs and lungs to strain of any kind, the hounds choose to either run or walk, aiding one another with helpful code calls such as "On On!" and "Are You?"

Having thus spent the better part of a couple of hours traipsing across some part of the city the hares chose to grace that particular evening, the hares and hounds come together in a "circle" reminiscent of the Dead Poets' Society, except that the literary extent of this circle is limited to the realms of "There once was a man from Nantucket."

Presided over by the "Grand Master" and officiated by the "Religious Authority", the author could be questioned about the integrity of his self-established rebel nature, seeing as he is a willing participant in the proceedings. But, aahhh... you would then observe the sheer over-the-top ludicrousness of the contrived formality and begin to empathize, as the realization slowly dawns that the object of the circle's pompous mockery is none other than itself! Nobody is spared, and little is considered sacred.

"You really, really hate something? Fantastic! Your Hash name will ensure that you are reminded of it at all times!" "What country did you say you are from, again? Hoo Boy! Have we got a song for you or what!"

Thus it goes on, this circle of gentle hazing and back-slapping bonhomie, aided admirably by the signature that dots the line on every Hash chapter's bottom - beer.

So, the next time you see the author singing soulfully the song of the Hash at some circle as you swing by in your eco-friendly hybrid, smug with the satisfaction of having thumbed your nose at establishment, please realize that he hasn't sold his soul. It's all for a noble cause - beer.

ADVERTISEMENT
This page was tagged for
kolkata hash house harriers
hotel event forsing asong jop sainikpuri
kalpataru +hyderabad
hyd+harries+special
+hyderabad hash house harriers
Follow @fullhyderabad
Follow fullhyd.com on
About Hyderabad
The Hyderabad Community
Improve fullhyd.com
More
Our Other Local Guides
Our other sites
© Copyright 1999-2009 LRR Technologies (Hyderabad), Pvt Ltd. All rights reserved. fullhyd, fullhyderabad, Welcome To The Neighbourhood are trademarks of LRR Technologies (Hyderabad) Pvt Ltd. The textual, graphic, audio and audiovisual material in this site is protected by copyright law. You may not copy, distribute, or use this material except as necessary for your personal, non-commercial use. Any trademarks are the properties of their respective owners. More on Hyderabad, India. Jobs in Hyderabad.