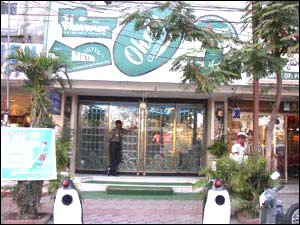 Deepa Menon / fullhyd.com
One of the oldest and best-loved family ice-cream parlours in town, Havmor was there long before any of its more glamourous neighbours turned up at Hotel Baseraa's Ohri's Cuisine Court. Tried, tested and deemed fabulous.

There's no doubt this is a slightly more expensive alternative to other ice-cream joints, but most people come to Havmor not just for dessert but often for an entire meal. And if you took a look at the size of the sundaes here, you'd see why. The choice is quite staggering, and most everything you order is garnished with three large wafers, nuts and jelly.

The most popular dish here is the Bull's Eye, a large hunka chocolate pastry served with two scoops of vanilla ice-cream. At all Baseraa and Ohri outlets, this is the most requested dish on the menu. Other favorites include the Titanic Sundae, with around eight different flavors, the Havmor Special, which is just as magnificent, the strawberry-flavoured Lady In Red, butter-scotch Black Velvet and chocolate-flavored Midnight Beauty. Havmor's latest sinful offering is the Awful Awful, which is great for those times when only an extreme overdose of chocolate can hit the spot.

The pastry tray is also quite famous, especially for the Black Forest and Chocolate Truffle. The portion sizes here are mammoth, and you won't be able to do justice to the place right after a big meal. The cola slushes are also bigger that usual, and usually quite good if you keep away from lime.

ADVERTISEMENT
This page was tagged for
havmor basheeebagh
ohris havmor basheer bagh
havmor ice cream distributor in hyderabad
havmore ice cream agency hydeabad
havmor icecream parlour reviews and income
Follow @fullhyderabad
Follow fullhyd.com on
About Hyderabad
The Hyderabad Community
Improve fullhyd.com
More
Our Other Local Guides
Our other sites
© Copyright 1999-2009 LRR Technologies (Hyderabad), Pvt Ltd. All rights reserved. fullhyd, fullhyderabad, Welcome To The Neighbourhood are trademarks of LRR Technologies (Hyderabad) Pvt Ltd. The textual, graphic, audio and audiovisual material in this site is protected by copyright law. You may not copy, distribute, or use this material except as necessary for your personal, non-commercial use. Any trademarks are the properties of their respective owners. More on Hyderabad, India. Jobs in Hyderabad.