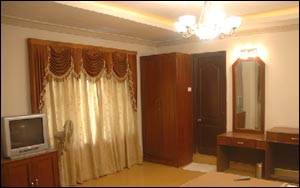 Naveen Yellamati / fullhyd.com
Once the backwater of the twin cities, the Dilsukhnagar-Vanasthalipuram neighbourhood is now a resurgent and thriving center with a zillion businesses and an ever-growing population. Surprisingly, for a neighbourhood as bustling and as flourishing as this, there is just one decent hotel.

Rajadhani Residency is a simple but large building located in Auto Nagar, Vanasthalipuram. Upon entering the hotel, don't be bewildered if you can't find the front desk - this hotel doesn't have a lobby, and the reception is on the second floor. And the comic part is, there's no one to tell you what is where.

Rajadhani has 52 rooms, some of which are elegant while the others average at best. The suites are expectedly swell, with two large rooms with two large couches, comfy chairs, slick tables, a kingsize double bed, and, guess what, two bathrooms! There is a minibar, too, and, of course, a flatscreen TV. The bathrooms surprisingly have no bathtubs.

The other rooms come in two variants - A/C and non-A/C. The A/C rooms offer good value for money in that they're reasonably furnished with queensize beds, marble flooring, TVs, tables, cushioned chairs, closets and clean no-frills bathrooms, while the non-A/C kind have the same stuff but are smaller in size, and the bathrooms have a certain odour making the rooms just about livable.

Rajadhani Residency has an attached veggie multicuisine restaurant, but room service caters to non-vegetarians too.

ADVERTISEMENT
This page was tagged for
ranadhani residency in vanasthalipuram
motel rajadhani hyd vanasthalipuram
hotels near vanasthalipuram hyderabad
lodges at vanastalipuram
lodges in vanastalipuram
Follow @fullhyderabad
Follow fullhyd.com on
About Hyderabad
The Hyderabad Community
Improve fullhyd.com
More
Our Other Local Guides
Our other sites
© Copyright 1999-2009 LRR Technologies (Hyderabad), Pvt Ltd. All rights reserved. fullhyd, fullhyderabad, Welcome To The Neighbourhood are trademarks of LRR Technologies (Hyderabad) Pvt Ltd. The textual, graphic, audio and audiovisual material in this site is protected by copyright law. You may not copy, distribute, or use this material except as necessary for your personal, non-commercial use. Any trademarks are the properties of their respective owners. More on Hyderabad, India. Jobs in Hyderabad.