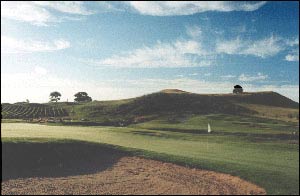 Shantan Reddy / fullhyd.com
Okay, now keep those shoulders steady, eye on the ball and swing through. Remember to aim at 12 o' clock, said the trainer as I wiggled my backside professionally. THUNK, I ended up at 2 o' clock, and my first attempt at golf was lauded by everyone except the one standing at 2 o' clock and 1 minute.

Golf is a game that might be considered boring by many, but the true sportsman recognises that the ultimate competition is with the self, and this is the game that brings it out most. The man, his mind and acres of greenery to calm the frazzled soul.

The Railway Golf Club is situated, unlike other courses, in the middle of the city, and is a 9-hole course where you would tee off at Genesis, go on to play holes called Retreat, Hop and Waterloo to name a few, and finish off with Homecoming. The course par is 36-i. e., to maintain an even score, the 9 holes should be completed in 36 shots.

The course is extremely well-maintained, with fairways and greens that are a sight for sore eyes. It has about 150 members, of whom about 20 are regulars. The regulars regard this course as the most challenging one in Hyderabad, with well-placed bunkers and thickets of greenery to impede progress. Caddies are available at the club as are tutors. One guest is allowed per member, twice a week. The course aims to hold club level tournaments with golfers coming from various golfing clubs in the state.

ADVERTISEMENT
This page was tagged for
railway golf course
Tarnaka Railwaygolf club rear
iriset address
list golf courses hyd rly
iriset house
Follow @fullhyderabad
Follow fullhyd.com on
About Hyderabad
The Hyderabad Community
Improve fullhyd.com
More
Our Other Local Guides
Our other sites
© Copyright 1999-2009 LRR Technologies (Hyderabad), Pvt Ltd. All rights reserved. fullhyd, fullhyderabad, Welcome To The Neighbourhood are trademarks of LRR Technologies (Hyderabad) Pvt Ltd. The textual, graphic, audio and audiovisual material in this site is protected by copyright law. You may not copy, distribute, or use this material except as necessary for your personal, non-commercial use. Any trademarks are the properties of their respective owners. More on Hyderabad, India. Jobs in Hyderabad.