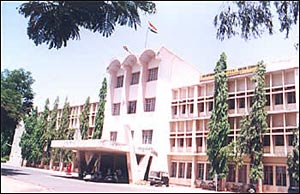 OU is to Hyderabad what the earth is to the atmosphere. It's perhaps an exercise worth the inanity to even start counting how many lives it's shaped and how many distinguished alumni it's produced, and there's no connecting the dots that any Hyderabadi does in his later life that doesn't involve OU is some way. If the name is not on your own certificates somewhere, it is on your best friend's, your girl's, your Dad's or at least your first bike's. (Don't ask about that last bit - it's hard to complete a sentence as emotional as that.)

Like we all know, no college can offer an independent curriculum unless it's an ISB - it has to be either affiliated to a university or deemed one for students to trust it. And that brings 90% of colleges in Hyderabad under ambit of Osmania University (the rest being some engineering colleges affiliated to JNTU, some independent/autonomous recognized institutes like NALSAR, ICFAI, IIIT, ISB and NIFT, and some other universities like HCU, Telugu University and B R Ambedkar Open University). Whichever of these colleges you study in, your exams will be conducted and evaluated by OU, and your final degree will be awarded by OU (without even your college's name on it).

Set up in 1918 and founded by the Nizam VII, the first major Osmania University building was the famous architectural masterpiece now known as the Arts College. If the building is gape-inspiring from the exterior, it robs you of whatever self-worth you are left with once you enter it, with doors, columns and corridors that at once transport you to the Mughal era and make you feel Lilliputan.

OU was the first Indian university to offer learning in a local language, i. e. Urdu. In 1948, it became an independent University, and the medium of instruction was changed to English. Today, its jurisdiction transcends the twin cities of Hyderabad and Secunderabad, into the five districts of Telangana, and it would take a student many years of aimless wandering to familiarize himself with the 1,200-acre campus, replete with magnificent buildings and spacious grounds.

Here are some more astounding numbers and some exaggeration:

The Central Library is an imposing structure, and many librarians are said to have been lost in its passages ...and some search parties, too!

70 acres of the OU campus are covered with gardens including the Landscape Garden which is frequented by students and civilians alike and plays host to the All India Science Congress among other events. From the city into the OU campus there's a 2 to 3 degree celsius shift in temperature, and the OU campus is Hyderabad's lung, so to speak. The campus also has a deer sanctuary where the endangered Black Buck finds a safe haven.

Indoor facilities: Chess, Table Tennis and Carroms are provided in the Students' Lounge.
Outdoor facilities: Cricket, Volleyball, Basket Ball, Badminton, Handball, Hockey, Football, Athletics and Tennis are available at the University grounds. There is also a gymnasium for Weight-Lifting and Body-Building. (Like, what else would you do in a gymnasium?)

Student welfare is high on the list of priorities here, and free health care is provided at the health center to students, the staff and their families. The University Employment Information and Guidance Bureau is a wing of the Department of Employment and Training, Government of Andhra Pradesh. Its activities include registration of unemployed graduates, and vocational, professional and career guidance and counselling. It displays on its notice board the vacancies notified by different employers. It also arranges lectures on various facets of career planning and job opportunities.

There is a proposal to upgrade the OU engineering colleges to an IIT now. That should do wonders both for the students and the alumni.

The key behind the awesome success story of Osmania University is not only its rich history, cosmopolitan mix of students and respected faculty, but also that it provides affordable higher education. An OU degree is recognised worldwide, and OU has been awarded the FIVE-STAR status by the National Accreditation and Assessment Council (NAAC) of the University Grants Commission, Government of India, in 2001.

Every place has its goods and its bads. Several students, parents of students, faculty and alumni of OU, and several intellectuals of town, uniformly complain about the high degree of politics in the colleges of OU, and how some student bodies, started ostensibly to campaign for students' rights, breed casteism and groupism in impressionable minds and trample upon people who try to stand up for themselves or speak out against such bodies or their key members. And how while the students in the private colleges and autonomous institutes like IIIT come out squeaky clean, several pass-outs of the OU campus colleges have experienced psychological scarring already - memories of domination by muscle-power that will haunt them.

But no fleas ever did an elephant in - the engineering colleges of Osmania University are considered next just to the IITs in India, and Osmania Medical College is amongst the most coveted medical college in AP. Generations of students from OU have gone on to change the world, and continue to.

ADVERTISEMENT
This page was tagged for
osmania central university tharnaka
osmania university hyderabad address tarnaka
osmania university address in
osmania university landscape garden history
Ou campus tharnaka
Follow @fullhyderabad
Follow fullhyd.com on
About Hyderabad
The Hyderabad Community
Improve fullhyd.com
More
Our Other Local Guides
Our other sites
© Copyright 1999-2009 LRR Technologies (Hyderabad), Pvt Ltd. All rights reserved. fullhyd, fullhyderabad, Welcome To The Neighbourhood are trademarks of LRR Technologies (Hyderabad) Pvt Ltd. The textual, graphic, audio and audiovisual material in this site is protected by copyright law. You may not copy, distribute, or use this material except as necessary for your personal, non-commercial use. Any trademarks are the properties of their respective owners. More on Hyderabad, India. Jobs in Hyderabad.