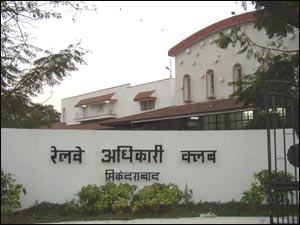 Akhil Singhal / fullhyd.com
More exclusive than the Zoroastrian Club but with membership not determined as much by coincidence of birth, the Railway Club hits the middle path between accessible and snooty. While admittance is restricted to Class 1 Railway Officers, the Club also welcomes dependents and a few outsiders nominated by members.

The ambience is nostalgic of Railway Clubs around the country, and is airy, open and clean, making you wish you had studied harder for that UPSC exam. The atmosphere is typical club - a combination of sports, cards and billiards.

Members have access to a large community hall, a library, a card room, an open-air restaurant, a bar, lounges, a swimming pool, a dining hall, an open-air theater, badminton, tennis and squash courts, a children's park, a table-tennis room, and a gym, aerobics and health club, with sauna and jacuzzi attached.

ADVERTISEMENT
This page was tagged for
Railway officers club mettaguda
officers club tarnaka
railway officers club summer camp tarnaka Hyderabad
Railway officers group A officers club
railwAy officers club swimming pool
Follow @fullhyderabad
Follow fullhyd.com on
About Hyderabad
The Hyderabad Community
Improve fullhyd.com
More
Our Other Local Guides
Our other sites
© Copyright 1999-2009 LRR Technologies (Hyderabad), Pvt Ltd. All rights reserved. fullhyd, fullhyderabad, Welcome To The Neighbourhood are trademarks of LRR Technologies (Hyderabad) Pvt Ltd. The textual, graphic, audio and audiovisual material in this site is protected by copyright law. You may not copy, distribute, or use this material except as necessary for your personal, non-commercial use. Any trademarks are the properties of their respective owners. More on Hyderabad, India. Jobs in Hyderabad.