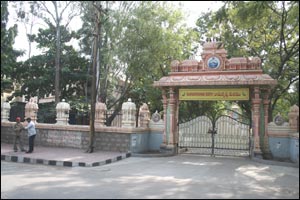 Kashif Ali / fullhyd.com
Three times every year, you see serpentine and raucous queues on the Indira Park - Chikkadpally road. They start at 4am outside counters that open at 9am. Now however bored people are, they usually do not randomly stand in a queue. Even in Mumbai. Yes, these queues are for a very specific reason - they are for some ridiculously low-priced high-quality language classes.

If you are wondering what got the Ramakrishna Math into this, well, the Ramakrishna Math believes that languages are a way of juxtaposing yourself into the cultures and thoughts of various societies and nations. It must be true if they say so. The institute imparts courses in seven languages - English, Hindi, Sanskrit, French, German, Japanese, Spanish and Chinese. The first session of courses starts in mid-January, with the second and third sessions starting in July and mid-October respectively.

The prerequisites for the spoken English classes are slightly different, with the entire course comprising of 4 levels, and each level's duration being three months, which is approximately 80 hours.

Matters of quality and integrity are irrelevant as the teachers here adhere to a very strict form of moral conduct. The fees for the courses are, like we said, incredibly low - Rs. 500 for German, Chinese, French, Spanish and Japanese, Rs. 250 for Hindi, and Rs. 300 for Spoken English and Sanskrit.

ADVERTISEMENT
This page was tagged for
ramakrishna math spoken
ramakrishna matam applications for Spanish
ramakrishna matam language clasess
Ramakrishna mattam application dates in spoken English
ramakrishna mutt in hyderabad tank bund
Follow @fullhyderabad
Follow fullhyd.com on
About Hyderabad
The Hyderabad Community
Improve fullhyd.com
More
Our Other Local Guides
Our other sites
© Copyright 1999-2009 LRR Technologies (Hyderabad), Pvt Ltd. All rights reserved. fullhyd, fullhyderabad, Welcome To The Neighbourhood are trademarks of LRR Technologies (Hyderabad) Pvt Ltd. The textual, graphic, audio and audiovisual material in this site is protected by copyright law. You may not copy, distribute, or use this material except as necessary for your personal, non-commercial use. Any trademarks are the properties of their respective owners. More on Hyderabad, India. Jobs in Hyderabad.