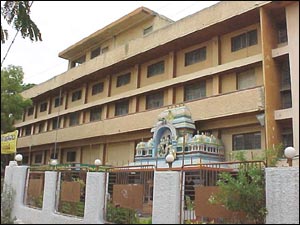 Aishwarya Subramanyam / fullhyd.com
Think Ravindra Bharathi on a smaller scale, but just as active. The Thyagaraja Gana Sabha is just the right size for a certain kind of event, and dominates the culture scene in this part of town.

It's perfect for smaller organisations, and a huge favorite with the city's dance and music schools. The Kuchipudi performances in particular are quite prolific, and held here every month; there are also regular Telugu literary programmes, with the less-than-occasional play. The participation from the districts and from out-of-town is not very heartening, however, as the place is frequented mostly by city-based organisations.

Their most popular and best-attended event is the annual festival held in January, Aradhana, a celebration of local talent through a series of performances in music, dance and theater. Many young people sign up to bravely broadcast their skills to the world, amid hysterical cheering-on by family members. This festival, coupled with a similar one in May, Thyagaraja Jayanti, assures the Sabha of a lengthy list of faithful patrons, who seemingly prefer functionality to glamor, and don't mind travelling the distance for it.
Share. Save. Connect.
Tweet
SRI THYAGARAJA GANA SABHA SNAPSHOT
EVENTS AT SRI THYAGARAJA GANA SABHA
There are no events at Sri Thyagaraja Gana Sabha scheduled currently.
SRI THYAGARAJA GANA SABHA USER REVIEWS
1 - 14 OF 14 COMMENTS
POSITIVE  |  NEGATIVE |  NEWEST  |  OLDEST  |  MOST HELPFUL  |  LEAST HELPFUL
USER RATING
10
3 USERS
Ambience
Value For Money
10.0
10.0
MR.KARRI SUBBI REDDY, EMAIL:ks on 15th Aug 2019, 8:20am | Permalink
Sir,I want the video clipping of Smt.Vimalakka felicitation held on 11.08.2019at Gana sabha
Seetha Ramaiah Velicheti on 8th Jul 2019, 11:46am | Permalink
www.youtube.com/seetharamaiah1
b udaya kumar on 28th Sep 2018, 7:38pm | Permalink
its very useful for all walks of artistes to prove their talent


Pros:
Cons: toilets have been worst since decades in the first floor where no sufficient water is not there and out going water comes out under our feet and we have to clean with less water.
SEETEPALLI SARADA on 4th Oct 2016, 11:16pm | Permalink
Hi... I am SEETEPALLI SARADA WORKING AS A
MUSIC TEACHER CONDUCTING HOME TUTIONS IN CARNATIC MUSICS WANTS TO PARTICIPATE ANY PROGRAMMES IN THYAGARAJA GANASABA SO PLS INFORM TO THIS NO 9493724867 (UPPAAL) IF ANY CHANCES ARE THERE.
deepti_giriraj on 10th Oct 2015, 8:19am | Permalink
Anbody pl
Giriraj on 10th Oct 2015, 8:15am | Permalink
What is the procedure to attend a programme
Venkatappaiah on 17th Nov 2014, 4:56pm | Permalink
To: The Concerned Authorities, Tyagaraya Ganasabha, Chikkadpally, Hyderabad

Sir, kindly see to enter Date, time wise detail schedules of Cultural Programmes that happen in Sri Tyagaraya Gana Sabha, Chikkadpally, Hyderabad
V. Suryaprakash on 29th May 2014, 4:18pm | Permalink
Sir why don't you mention daily program's to be held at auditorium just like rravindrabharathi is doing in the net. Pl utilise the net sir , to enable the people to know their interested events
abhilash on 12th Nov 2016, 5:40pm | Permalink
Hw I got ravindra bharathi daily events schedule where it was displayed
kKrishna Rao Gowd on 6th Feb 2014, 9:42pm | Permalink
It is high time the TGS should have an official website to broadcast it's events and activities.
Krishna Rao Gowd
D Sandeep on 14th Jan 2014, 1:03pm | Permalink
Hii My Name is Sandeep I am Grand Son of Late D.V.Panduranga Rao...I just wanna Know that after his death his students conducted a Program in Thyagaraya Gana Sabha... i missed that program of his students speaking about my Grand Father Do u People have that video r any one have it... can please mail me (sunsand_888@yahoo.co.in) r upload the video in youtube...
with Regards,
D.Sandeep
keerthana on 3rd Oct 2013, 1:52pm | Permalink
Such a great composer he is
RATING
10
D venkateswarlu on 27th Feb 2013, 2:57pm | Permalink
It is nice place to watch the programmes
KMKRAJU on 1st Feb 2013, 3:15pm | Permalink
GANA GANDHARVULA NILAYAM E E THYAGARAYA GANA SABHA
S.P.Chari (Member, Tyagaraya G on 25th Sep 2009, 8:04am | Permalink
The best meeting place for meetings of writers and literary associations. A wonderful place for extending honours to the celebrities,singers, and actors. A place with cordial atmosphere for Cultural Festival Presentations.

It should avoid political meetings and racial get togethers.

It should provide an information column in news papers about its activities.


Pros: Parking Problem
Cons: To advise visitor to arrive as a common man or to find his own parking place away from the hall.
RATING
10
D venkateswarlu on 27th Feb 2013, 2:54pm | Permalink
I feel that there is a lot of problem in parking

ADVERTISEMENT
This page was tagged for
Sri Thyagaraya Gana Sabha ???? ???????? ??? ??
tyagaraja ganasaba ramesh amuda Date 21/7/2019
Pincode of Sri Thyagaraya Gana Sabha, Chikkadpalli, Hyderabad
live prog.Tyagarayaganasabha Chikkadapalli
thyagaraya gana sabha in tankband to abids route map
Follow @fullhyderabad
Follow fullhyd.com on
About Hyderabad
The Hyderabad Community
Improve fullhyd.com
More
Our Other Local Guides
Our other sites
© Copyright 1999-2009 LRR Technologies (Hyderabad), Pvt Ltd. All rights reserved. fullhyd, fullhyderabad, Welcome To The Neighbourhood are trademarks of LRR Technologies (Hyderabad) Pvt Ltd. The textual, graphic, audio and audiovisual material in this site is protected by copyright law. You may not copy, distribute, or use this material except as necessary for your personal, non-commercial use. Any trademarks are the properties of their respective owners. More on Hyderabad, India. Jobs in Hyderabad.