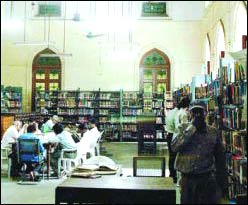 Ravi Mundoli / fullhyd.com
The State Central Library is quite possibly a treasure trove. "Possibly", because we can't be sure. "Treasure trove" because you pretty much need standard issue filmi treasure hunter equipment to get anywhere inside its cavernous spaces. Grit and determination, maps, torches, a marked tolerance for dust and critters, and a svelte starlet (or star, as the case may be). The svelte starlet is for effect, and for helping you pass the time, should you find nothing worthwhile (a most likely eventuality).

This enormous hulk of a building towers across the Musi, perhaps glaring enviously at the younger and much better kept Salarjung Museum. The structure was completed in the 1930s, and it seems as though the last time anyone bothered to sweep the grounds and dust the bookshelves was when the Quit India movement was a gleam in the Mahatma's eyes.

At the entrance, a reassuring sign says "Internet is working", as though if it weren't for the worthies at the SCL, the rest of the world would be in the dark about this crucial nugget of information. Pass indoors through the vaulted portals (yes, it is the sort of edifice that demands words like "vaulted", "portal" and "edifice"). At the entrance you are required to deposit your bag with the sketchiest security desk, and switch off your cellphone. This is so that you don't the disturb thousands of patrons who are nowhere to be seen.

The important stuff about the SCL:

3. You are allowed to borrow 2 books at a time from the lending section for up to 15 days. However (get this), the total value of the books cannot exceed the deposit amount.

4. The textbook section is open from 8am to midnight. Apparently no one has bothered to check on the reading habits of our youth since the time of Nawab Mir Yousuf Ali Khan.

5. There is a photocopying facility in the basement, and if you are really nice to the staff, you can actually get stuff copied.

The really important stuff about the SCL: don't stand or sit directly beneath the fans. Some are liable to come plummeting down on your head. We got this tidbit directly from the staff and are passing it on, proud that fullhyd.com can contribute to your physical well-being while filling the gaps in your education.

The snide remarks apart, all the basic infrastructure we normally associate with libraries is actually present. The Dewey decimal system rules, and there is a card index of authors and titles. There are books and manuscripts in English, Telugu, Hindi, Tamil, Kannada, Sanskrit, Arabic and Persian. They claim that they have most local periodicals and newspapers from the 1940s. The reading rooms are large and well-lit, and much to our surprise, there were about a dozen people actually earnestly engaged in reading and writing.

On the flip side, we tried finding a book using the card index and failed three times out of three. And we noticed Dickens' "A Christmas Carol" nestled amongst books on Carnatic and Hindustani music. In the lending section, the lights work only randomly. So if you're studying the Naatyashaastra, you can knock yourself out, but if it's the Holy Roman Empire that floats your boats, tough luck.

In the final analysis, visit the SCL only if you've exhausted all other options, or if you're prepared to spend hours and shovel your way through tons and tons of unorganized paper. The SCL is a gigantic example of a What-Might-Have-Been. With the right kind of funding and leadership, there is no reason why this decrepit excuse of a library can't turn into a clean, attractive, well-appointed house of knowledge.
Share. Save. Connect.
Tweet
STATE CENTRAL LIBRARY SNAPSHOT
EVENTS AT STATE CENTRAL LIBRARY
There are no events at State Central Library scheduled currently.
STATE CENTRAL LIBRARY USER REVIEWS
1 - 10 OF 10 COMMENTS
POSITIVE  |  NEGATIVE |  NEWEST  |  OLDEST  |  MOST HELPFUL  |  LEAST HELPFUL
USER RATING
6.0
2 USERS
Collection
Service/Courteousness
Ambience
Value For Money
NA
NA
NA
NA
Abhay on 16th Jan 2023, 12:10pm | Permalink
Can public visit the library
Khan on 18th Jan 2022, 12:30am | Permalink
To
The Honorable Director,
Central Public Library,.

Dear Sir,
Greetings,
Wish you Happy Sankrantri Festival.
Subject : Proposal & Request to Rename the Central Public Library after any one of the following Great Personalities include Installation of Wax Statues & Portraits in Central Hall – Regarding – Requested.

I would like to bring to your kind attention to the above mentioned subject as matter of pride for Telugu people, keeping in view the contributions made by the native men and women of Telangana and preservation of rich heritage i.e., Telugu cultural, values, developments, traditions, language, identity and after sacrifices and struggles for over eight centuries to achieve & re-gain glory of Telugu people, it is in the interest of Telugu people to highlight dignity, pride & self-determination and a revival to educate the young generation as “who I am and Whom I belong”

In this regard, before launching the prestigious renaming ceremony, a seminar to be organised by name of Glory of Kakatiya Dynasty at library inviting VIPs to speak and address the audience.

Look forward to receiving your favourable response and request to submit and recommend to the Ministry of information & Broadcasting, for approval of the said proposal, and for this act of kindness, I shall be highly grateful to you.
Long live Jai Telangana
“May God Almighty Bless You”
Thanking You,
Faifthfully Yours,
Senior Citizen & Reader

CC : To The Honorable Chairman
Public Libraries (Govt. of Telangana)

sayeed on 9th Mar 2020, 11:02pm | Permalink
an auditorium is required for the library to host multiple activities of events.

a social club shall be separately built to facilitate the students and general people to interact males and females to discuss, and freedom to enjoy life using their leisure time as productive and also it promotes health, energy and entusiasm a fine example of such a social club already in existence in banjara hills by name LA MAKAN

this city is like boredom as no place for young students and general public to spare their liesure time to sit talk and meet and share opinions?
sayeed on 9th Mar 2020, 10:55pm | Permalink
monthly quarterly and annually events shall be hosted by the management of library to attract students and general people from all walks of life. covering range of topics like
cultural, social,, educational, scientific, economics, political entertainment to keep attracting the activities of library and to make it as hub all in one and draw huge people who are desparate to involve themselves in productive activities
invite sponsors who always looking for opportunities and they are the only source oof investment in such events and again the library receive revenues

ADVERTISEMENT
This page was tagged for
afzal gunj librarri
telangana state central library opening time
how to get membership in telangana state central library
telangana state central library membership
afzalgunj hyd library
Follow @fullhyderabad
Follow fullhyd.com on
About Hyderabad
The Hyderabad Community
Improve fullhyd.com
More
Our Other Local Guides
Our other sites
© Copyright 1999-2009 LRR Technologies (Hyderabad), Pvt Ltd. All rights reserved. fullhyd, fullhyderabad, Welcome To The Neighbourhood are trademarks of LRR Technologies (Hyderabad) Pvt Ltd. The textual, graphic, audio and audiovisual material in this site is protected by copyright law. You may not copy, distribute, or use this material except as necessary for your personal, non-commercial use. Any trademarks are the properties of their respective owners. More on Hyderabad, India. Jobs in Hyderabad.