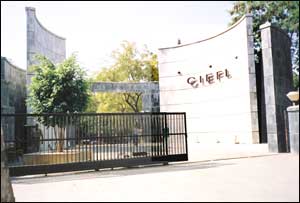 Priyanka Pulla / fullhyd.com
The Central Institute of English and Foreign Languages (CIEFL) is an abrupt break from the OU campus that leads up to it. Like the territory of a foreign embassy, it has a full-fledged culture of its own, thriving within its the oasis-like precincts. A culture which is, among other things, cosmopolitan, secular and patently free!

Pay a visit to the water tank by the mess, and you will soon catch the bohemian flavor of life here. The nose rings and dreadlocks are just the attire, but one would really kill to know what they discuss so seriously between blowing smoke rings.

How this melting pot came about is a whole bunch of factors that serindipitously converge at CIEFL. First, it's five schools that offer courses that are unique in India and most of Asia. Languages German, Spanish, Arabic, Japanese, Latin, French and Russian, apart from the Sanskrit work Panini, are all taught under one roof. And that means CIEFL attracts students from all over the world. The international traineeship program brings in its fair share as well. So what you have is a colony of Indians, Asians, Latin Americans and Africans, sharing classes, meals and living areas.

Next, you have several professors of world repute. Ashok Bhalla, Susie Tharu and Javed Alam, to name a few. The classes held are mostly interactive, and debating what is being taught is actively encouraged. The fancy sounding cafeteria system of education means you get to choose the subjects rather than follow a prescribed list, no matter what you decide to specialise in.

On-campus restrictions on students' behaviour are almost nil. The girls' hostel is open to outsiders till 11pm, and the boys' hostel, always.

Finally, there is the 15-acre campus that is almost hermetically self-sufficient. There are a large library, a 24x7 computer center, a men's hostel, a women's hostel, the staff quarters, non-teaching staff quarters, the playgrounds, a mess, the Education And Media Research Center, a health center, a guest-house, a store, a photocopy shop and a canteen. Almost a mini-township that is also rather far-flung from the city, it probably ensures students stay in and make this campus a place buzzing with activity.

There are quirks aplenty on campus too, like demonstrations to discontinue Saraswati worship in the campus library since it is believed to have unsecular overtones.

To sum up, it suffices to say that students around here are a chilled and thrilled lot. Chilled because they have the freedom of choice for practically everything. And thrilled because it does not come at any price really. There is probably hardly another course that is world-class in its own right and still comes at about Rs. 2,000 p. a. The hostel with messing, that definitely makes the 'decent' grade, is even more delightfully priced at Rs. 6,000 p. a.

So, if languages and cultural studies are what you wish to pursue, your list of colleges in Asia is gratefully short. And if you happen to be a Hyderabadi, finally you can go to the ivy league at home.
Share. Save. Connect.
Tweet
THE ENGLISH AND FOREIGN... SNAPSHOT
THE ENGLISH AND FOREIGN LANGUAGES UNIVERSITY (EFL) SNAPSHOT
EVENTS AT THE ENGLISH AND FOREIGN...
EVENTS AT THE ENGLISH AND FOREIGN LANGUAGES UNIVERSITY (EFL)
There are no events at The English And Foreign Languages University (EFL) scheduled currently.
THE ENGLISH AND FOREIGN... USER REVIEWS
THE ENGLISH AND FOREIGN LANGUAGES UNIVERSITY (EFL) USER REVIEWS
1 - 3 OF 3 COMMENTS
POSITIVE  |  NEGATIVE |  NEWEST  |  OLDEST  |  MOST HELPFUL  |  LEAST HELPFUL
USER RATING
10
1 USER
Quality
Ambience
Service/Courteousness
Value For Money
10.0
10.0
9.0
9.0
My name is Ata Mohamed on 17th Apr 2018, 6:31pm | Permalink
Hi good evening
Nagina Shashanka on 7th Jun 2014, 4:31pm | Permalink
I want to join
REJOICE on 1st Jul 2009, 11:14am | Permalink
The EFL has the privilege and prestige of teaching, training and producing some of the amazing scholars in the field of language sciences with particular reference to English. The faculty ignite the spark in the students and the over all passion for the discipline chosen by the respective scholars is something to be seen to be believed. It would be in line with the glory of the institution if continuous and conscious steps are taken towards making it a role model for the entire country and the world by rewarding only the meritorious and keeping itself insulated from the issues of petty political / caste/religious constraints. Hip Hip Hurray, may the sun shine across the EFL to bathe it in its ever growing warmth and energy.

ADVERTISEMENT
This page was tagged for
spoken english in osmania university
How can I change my number to foreign to foerien
nagina shashanka
foreign language university hyderabad tarnaka TO JOIN
price of germany in eflu hyderabad
Follow @fullhyderabad
Follow fullhyd.com on
About Hyderabad
The Hyderabad Community
Improve fullhyd.com
More
Our Other Local Guides
Our other sites
© Copyright 1999-2009 LRR Technologies (Hyderabad), Pvt Ltd. All rights reserved. fullhyd, fullhyderabad, Welcome To The Neighbourhood are trademarks of LRR Technologies (Hyderabad) Pvt Ltd. The textual, graphic, audio and audiovisual material in this site is protected by copyright law. You may not copy, distribute, or use this material except as necessary for your personal, non-commercial use. Any trademarks are the properties of their respective owners. More on Hyderabad, India. Jobs in Hyderabad.