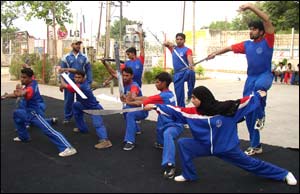 [This is a sponsor message]

M A Rahman Aqueel is a young and dynamic instructor at Wushu TaijiQuan Academy teaching Wushu-TaijiQuan to the interested students at Victory playground, Chaderghat.

M A Rahman Aqueel himself is a very talented practitioner of Wushu and took part in many district level, state level, junior national level and senior national level campionships, and won many medals and trophies. He has number of gold medals, silver medals and bronze medals to his credit. He is quite popular among the Wushu circuit. He has also served as coach and has judged at competitions. He has attended International Wushu training and coaching seminars at Nepal held in 2003 & 2005, and 2007 to improve his skills. His students also won many gold, silver and bronze medals in both State level and National level championships.

Previously, wushu figured significantly in the simple matter of survival through China's many wars and political upheaval. Its emphasis now has shifted from combat to performance, and it is practiced for its method of achieving heath, self-defense skills, mental discipline, recreational pursuit and competition. Every movement must exhibit sensible combat application and aestheticism. Routines are performed solo, paired or in groups, either barehanded or armed with traditional weaponry. In short, wushu is the most exciting martial art to be seen, felt, and ultimately practiced.

Taijiquan is a major division of wushu, utilizing the body's internal energy or "chi" and following the simple principle of "subduing the vigorous by the soft."

veda viyas on 30th Apr 2009, 9:23pm | Permalink
hi to all my self vasu student of wushu taiji quan academy hyderabad i have been learning this martial art's since 2006 wushu is a very acractive and dynamic game which improves your mind power stamina health hormony and activeness, My coach name is Abdul Rahman he has giving coaching to the students at victory play ground since 2003 he is good in coaching i got 2 bronze medals in the junior national championship 2003, and my classments secured many golds medals in the various wushu national championships more over few classments nominated for the wushu world championship from my ground so i am requesting you to select this wushu martial art for your fitness as well as self defence thank you

ADVERTISEMENT
This page was tagged for
taijiquan wushu academy
wushu trainer rahman aqeel
sports academy chaderghat
youth talent search international campionship nepal
wushu tai chi quan hyderabad
Follow @fullhyderabad
Follow fullhyd.com on
About Hyderabad
The Hyderabad Community
Improve fullhyd.com
More
Our Other Local Guides
Our other sites
© Copyright 1999-2009 LRR Technologies (Hyderabad), Pvt Ltd. All rights reserved. fullhyd, fullhyderabad, Welcome To The Neighbourhood are trademarks of LRR Technologies (Hyderabad) Pvt Ltd. The textual, graphic, audio and audiovisual material in this site is protected by copyright law. You may not copy, distribute, or use this material except as necessary for your personal, non-commercial use. Any trademarks are the properties of their respective owners. More on Hyderabad, India. Jobs in Hyderabad.