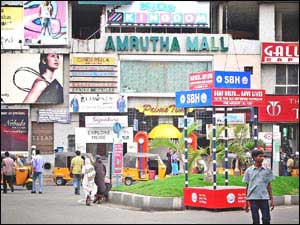 Himabindu Chitta / fullhyd.com
In the days when malls were a rarity in the Nawabi shehar, Amrutha Mall was quite the rage. The place had the indoor equivalent of an outdoor kids' zone, with a sea of plastic balls inviting you to drown in them. It was a pity that at five feet five inches, I was a foot too tall to plunge in.

Terminator beckoned from around the corner. Opportunities to save the world abounded, with the gaming section full of violent alien attacks and zooming motobikes. Prime Time was so crowded over weekends that getting a token for a game was the most challenging game of all.

Alongside, the Bakers and Pizzas started setting up Inns, and a few stores took refuge inside the Mall itself. Minerva Coffee Shop opened its Somajiguda branch with great pomp and ceremony.

Those were the days of innocence, when there were no Lifestyles and Centrals to lure us into paying four-figure sums for a pair of blue Jeans. Minerva, along with Shanbhag, was the reigning restaurant in town. Then the software revolution boomed, busted, and boomed again, and money and people came pouring into Hyderabad, and the city's character changed forever. So did Amrutha Mall.

Once it became fashionable to shop at malls, the aging Amrutha fell far behind her newer and hipper cousins. Despite crowd-pullers like CCD setting up shop on the outer periphery of Amrutha Mall, the rest of it remained a forgotten relic of the past, a past bereft of bowling alleys and multiplexes, a past where it was either Amrutha or nothing at all.

To be fair, Amrutha Mall failed because of its own refusal to innovate. Prime Time remained stubbornly open, despite the cold indifference of city crowds. Despite the high value of the real estate, no high-end brands were seduced to set up shop here for a considerable time.

ADVERTISEMENT
This page was tagged for
hyderabad amrutha mall,
amrutha mall somajiguda circle
amrtethaxxxmlal
malls of hyderabad
manepally jewellers showroom in amrutha hills in panjagutta
Follow @fullhyderabad
Follow fullhyd.com on
About Hyderabad
The Hyderabad Community
Improve fullhyd.com
More
Our Other Local Guides
Our other sites
© Copyright 1999-2009 LRR Technologies (Hyderabad), Pvt Ltd. All rights reserved. fullhyd, fullhyderabad, Welcome To The Neighbourhood are trademarks of LRR Technologies (Hyderabad) Pvt Ltd. The textual, graphic, audio and audiovisual material in this site is protected by copyright law. You may not copy, distribute, or use this material except as necessary for your personal, non-commercial use. Any trademarks are the properties of their respective owners. More on Hyderabad, India. Jobs in Hyderabad.