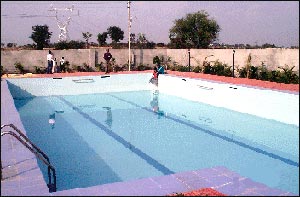 Ayanti Guha / fullhyd.com
The MCH swimming pool is a stalwart of Hyderabad's community life. Named after an ex-minister of the state, the pool was Hyderabad's first, and was the cynosure of attention of all its people - both the elite, and those who just loved to swim.

It has seen film stars and politicians amongst its ranks. Now, the kind of crowds that go there are decidedly middle-class, with children leading the pack. Sundays usher in the family crowd, and for many it's a cherished weekend ritual. The pool is no longer a host to celebs - not unless you count the swimmers who have won medals there and whose pictures proudly adorn the walls.

The pool is also a testimony to the changing times and changing lifestyles, and definitely the rise and fall of the rupee. When it opened way back in 1970, it used to cost Rs. 1 per hour, and anyone who could and wanted to pay could come and dive right in.

The pool has played many a role in the past: a national arena for competitions, a place for shooting films et al. In 1977, it was decided that things could be better maintained if a membership was started, and that's how it is now. For Rs. 400 per month, you can play at being mermaids - quite affordable by today's standards.

And for Vijay Singh, it is more than just a swimming pool - it's the work of a lifetime. The technical-in-charge for the past 28 years, he is an integral part of everything that goes on here. He was about to launch into more anecdotes about the pool when a couple of inquiries came in about the membership. He had to regretfully decline and tell them to apply early next year. Yes, makes you think. It's not merely for affordability that people throng here. They genuinely like to come here.

And if people being as fussy and demanding as they are about their lifestyles today, still get a sense of deep satisfaction and rejuvenation after coming here, then the pool authorities must be doing something. And a quick glance shows you exactly what that is: clean waters, happy people and frolicking bodies. Now that's value for money, and lots more.

The MCH swimming pool tells a quietly impressive tale of an establishment that has stood the test of the changing times and will always be an important part of the evolving Hyderabadi landscape. Plunge on.
Share. Save. Connect.
Tweet
B V GURUMURTHY MEMORIAL... SNAPSHOT
B V GURUMURTHY MEMORIAL MCH SWIMMING POOL SNAPSHOT
EVENTS AT B V GURUMURTHY MEMORIAL...
EVENTS AT B V GURUMURTHY MEMORIAL MCH SWIMMING POOL
There are no events at B V Gurumurthy Memorial MCH Swimming Pool scheduled currently.
B V GURUMURTHY MEMORIAL... USER REVIEWS
B V GURUMURTHY MEMORIAL MCH SWIMMING POOL USER REVIEWS
1 - 10 OF 10 COMMENTS
POSITIVE  |  NEGATIVE |  NEWEST  |  OLDEST  |  MOST HELPFUL  |  LEAST HELPFUL
USER RATING
4.5
2 USERS
Quality
Ambience
Service/Courteousness
Value For Money
7.0
8.0
6.0
10.0
Uday kumar on 8th Apr 2018, 4:40pm | Permalink
Sir,
Most of the contract coaches are taking money,and they will ask the money if i required how to do the swimming techniques, My request is that these coaches are there from since 10 years, give an opportunity for the new coaches. Now total one line payment has been, it is an excellent job.Keep it up
manasi on 20th Mar 2018, 12:49pm | Permalink
no don't it is goo swimming pool to learn and well maintained but every year problem to get forms, this year when we approached, it was told that everything online, when tried , no slots .
manasi on 20th Mar 2018, 12:45pm | Permalink
online swimming registeration this year is trash, the web is not supporting, do you think all can use online services.
Zakir on 2nd Apr 2017, 11:23am | Permalink
What they do is hard to imagine.I had visited the place on 31/3/2017 at 9.p.m and there was nothing written on the notice board nor any personnel present but when i arrived the next day 1/04/2017at 10.00 a.m i can see a notice pasted that the forms had already been sold out.
sar on 28th Feb 2018, 3:28am | Permalink
Yes its a fact bro, This will only happen only at B V GURUMURTHY MEMORIAL , shame on them
Jayasree on 11th Jun 2016, 11:03am | Permalink
Nice information thanks
fatema on 7th Apr 2015, 1:50pm | Permalink
When is d issue of forms?
gowth on 3rd Apr 2015, 9:32am | Permalink
plss tel me whn will the swimming classes the start.. and also specify the timing also for women and fee per month...
Shashidhar on 1st Apr 2015, 12:56am | Permalink
When will notification get released for 2015 swimming
Prakash Varma on 27th Mar 2015, 7:06am | Permalink
Cleaning of side wall tiles is not done year after year. Broken G I support pipe at the deep end of the pool not fixed since few years. All this in inspite of the pool remaining closed for 3 to 4 months for maintenance during winter
rasheed khan on 3rd Feb 2015, 9:03pm | Permalink
It is great to be at this pool but the service provided by the goons is pathetic. Just to learn swimming these people charge anywhere between 1500 and 3000 with not guarantee that you will be taught properly. To get the admission forms during summer is a harrowing experience as max. of the forms are sold at a high price.
LEAVE A COMMENT
fullhyd.com has 700,000+ monthly visits. Tell Hyderabad what you feel about B V Gurumurthy Memorial MCH Swimming Pool!
RELATED LISTINGS
Nizam Club
Opp Ravindra Bharathi, Saifabad
Dream Land Swimming Pool
Opposite Shiva Ganga Theatre, Sai Ram Colony, Gaddiannaram (6.7km)
Summer Splash
Taj Banjara Hotel, Banjara Hills
Splash Swimming Pool
Bapuji Nagar, Bowenpally, Inside Ashok Garden, Bowenpally (7.6km)
Dolphin Swimming Pool
No. 91, SVK, Madhava Reddy Colony, Gachibowli
more locations
Osmania University Swimming Pool
Abhilekhagaram, Amberpet
Shree Hanuman Vyayam Shala Swimming Pool
16, Ramkote Rd, Raghunath Bagh, Ramkoti, Sultan Bazar, Koti
Indoor Swimming Pool (Vahininagar)
Sikh Village Road, New Bowenpally (8.1km)
Oyster Swimming Pool
8-2-628 & 629, Road No. 1, Behind the Pizza Hut - (Road No. 12.Circle), Beside Kairali SPA, Banjara Hills (2.4km)
Mission Pools
H.No: 8-2-229/D/98, Hylam colony, Venkatagiri, Yousufguda
Seasons Indoor Swimming Pool
100 Ft Road, Behind image garden,Jaihind Enclave, Madhapur (9.4km)
AOC Centre
Wellington Rd, Rukminidevi Colony Annexe, Wellington Road (6.8km)
Ocean Swiming Pool
2-3-380, Rd Number 18, Cooperative Bank Colony, Nagole
JSR Swimming Pool
Door No 8-21/5, Champapet, Champapet
Manohara Swimming Pool
Opp. Vaartha News Paper Building, Near Indira Park, Lower Tankbund (2.4km)
collapse
RELATED CATEGORIES
Fitness Equipment
Gymnasiums
Aerobics
Bicycles
Equestrian
Golf Courses
Tennis Courts
Swimming Pools
Stadiums
SEARCH YELLOW PAGES
Dissatisfied with the results? Report a problem or error, or add a listing.
ADVERTISEMENT
SHOUTBOX!
{{todo.name}}
{{todo.date}}
[
ip{{todo.ip}}
]
{{ todo.summary }}... expand »
{{ todo.text }} « collapse
First  |  Prev  |   1   2  3  {{current_page-1}}  {{current_page}}  {{current_page+1}}  {{last_page-2}}  {{last_page-1}}  {{last_page}}   |  Next  |  Last
{{todos[0].name}}

ADVERTISEMENT
This page was tagged for
ghmc swimming pool application
ghmc swimming pool near me
MCH Swimming Pool Secunderabad, Telangana online application
ghmc swimming pool secunderabad registration
online application of swimming pool at patney ghmc
Follow @fullhyderabad
Follow fullhyd.com on
About Hyderabad
The Hyderabad Community
Improve fullhyd.com
More
Our Other Local Guides
Our other sites
© Copyright 1999-2009 LRR Technologies (Hyderabad), Pvt Ltd. All rights reserved. fullhyd, fullhyderabad, Welcome To The Neighbourhood are trademarks of LRR Technologies (Hyderabad) Pvt Ltd. The textual, graphic, audio and audiovisual material in this site is protected by copyright law. You may not copy, distribute, or use this material except as necessary for your personal, non-commercial use. Any trademarks are the properties of their respective owners. More on Hyderabad, India. Jobs in Hyderabad.