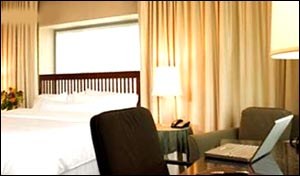 Yes, Harsha does have the entry-level class that Rs. 1,500+ for a room can buy. It appears rather petite by hotel standards, but then so does almost everything else on that road (except, to an extent, Quality Inn Residency). Harsha perhaps comes closest of 'em all to Quality Inn Residency, in that it has a popular restaurant attached - Belsons Taj Mahal, since 2007. And some good things in the rooms.

The hotel has 3 levels in its 60 rooms - Standard, Executive and Deluxe - with increasing amenities. All rooms come with the basics - A/C, 2 beds, 2 chairs, a TV, a dressing table, a mini-refrigerator, rather professional loos with basic toiletries (there's an interesting water-saving guide pasted inside), free breakfast, room service from the attached restaurant, a luggage closet and an additional rack outside. While there are no balconies and the view from the French windows is pretty sad (if you are unlucky, just the next building), the rooms themselves look as slick as you can expect in this money.

The Executive rooms also come with free coffee (a coffee-maker is kept in each room), softer beds, additional toiletries including a saving kit and a hair drier, and a digital safe locker. And the Deluxe ones, even more spacious, have a partition for any visitors with an additional TV there, an LCD TV, and a bigger refrigerator. The refrigerators may seem limited in utility since the hotel doesn't stock them with or serve liquor, but maybe the hotel knows its guests better.

Professional service, with the manager clad in a blazer and the front office personnel in ties, adds to your comfort factor given that you can be apprehensive when you first step in - we already told you what we think of the facade. Fortunately also for Harsha, no other hotel near the railway station really looks good from outside either (except, again, to an extent, Quality Inn Residency).

ADVERTISEMENT
This page was tagged for
hotel harsha nampally
harsha hotel hyd phone no
harsha lodge in nampally
hotel harsha phone no
Hotel Harsha Nampally Hyderabad
Follow @fullhyderabad
Follow fullhyd.com on
About Hyderabad
The Hyderabad Community
Improve fullhyd.com
More
Our Other Local Guides
Our other sites
© Copyright 1999-2009 LRR Technologies (Hyderabad), Pvt Ltd. All rights reserved. fullhyd, fullhyderabad, Welcome To The Neighbourhood are trademarks of LRR Technologies (Hyderabad) Pvt Ltd. The textual, graphic, audio and audiovisual material in this site is protected by copyright law. You may not copy, distribute, or use this material except as necessary for your personal, non-commercial use. Any trademarks are the properties of their respective owners. More on Hyderabad, India. Jobs in Hyderabad.