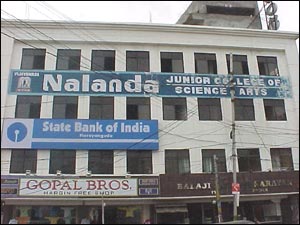 Sasi Kanth C / fullhyd.com
When even the not so crè­¥ de la crè­¥ colleges of the city gain prominence in today's rat race, Vijayawada Nalanda is one of the few junior colleges in the city with a proven track record. Nalanda is for the studious, all-rounder types. But, once you are in, forget the "all-rounder" part for the next two years. Lack of extra-curricular activities, crowded buildings and the evergreen clamor of the busy streets could affect you adversely. But, this not withstanding, an increasingly good performance in EAMCET and IIT puts Nalanda firmly in the league of the old masters of learning.

An excellent 5-year stint later, in 2005, Nalanda founded a boys' residential college in the city (its fifth branch here). Amongst all other amenities here, a swimming pool is on the offing too. It is a different thing that, getting down to the nitty-gritty, the pool is used more to generate revenue during summers than anything else.

Of its remaining arms in the city, the one at Narayanguda is more sought after because of a more proficient faculty. Dilsukhnagar, A S Rao Nagar (ECIL X Roads) and Kukatpally accommodate the other three branches.

Nalanda scores where most other junior colleges fall desperately short. Most junior colleges routinely pressurize students to churn out the record work, slog it out in the lab and finish the course, all at once at the fag end of the 2-year grind. Nalanda, appreciably, saves its students this anxiety. The load is distributed evenly through out the two years, right from the first month.

The IIT orientation is good. Almost everyone scores the required cut-off, but just in the prelims. Not being as successful in the finale continues to be the Achilles' heel. Orientation is offered for CA and the civil services exams, too, but the emphasis predictably lies on EAMCET and the IIT-JEE. And if you are a performer, your efforts won't go unnoticed. Huge fee waivers and rewards make you realize how education at Nalanda can be very inexpensive.

ADVERTISEMENT
This page was tagged for
Nalanda college Nandyal photos girls
Nalanda Junior college & High school Hyderabad, Telangana
nalanda jr college hyderabd
nalanda college in nandyal photos
nalanda junior college kothagudem telangana
Follow @fullhyderabad
Follow fullhyd.com on
About Hyderabad
The Hyderabad Community
Improve fullhyd.com
More
Our Other Local Guides
Our other sites
© Copyright 1999-2009 LRR Technologies (Hyderabad), Pvt Ltd. All rights reserved. fullhyd, fullhyderabad, Welcome To The Neighbourhood are trademarks of LRR Technologies (Hyderabad) Pvt Ltd. The textual, graphic, audio and audiovisual material in this site is protected by copyright law. You may not copy, distribute, or use this material except as necessary for your personal, non-commercial use. Any trademarks are the properties of their respective owners. More on Hyderabad, India. Jobs in Hyderabad.