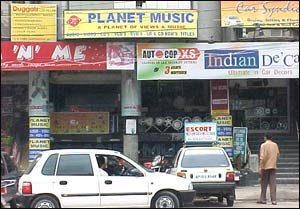 Arif R / fullhyd.com
Tucked away under one of Hyderabad's many commercial complexes, there's a rather subtle take on shopping for music and movies. At Planet Music you won't find wild snazzy decors, packed crowds or the loud music that's become quite common with other businesses desperate to attract customers and boost sales. What you will find is a cool & relaxed atmosphere, a nice place where you don't have employees breathing down your neck, eager to make a quick sale.

Laid out in a modest way, there's just a fraction of shelves that you'd normally expect at a music store, but they're loaded with a very thorough collection of CDs, DVDs and cassettes. For starters, they've got quite a collection of Hindi and Telugu audio CDs & cassettes. But that's not Planet Music's forte - if it's even possible, they've got a greater number of Hindi & Telugu Video CDs (VCDs). It's very likely that you'd be able to find whatever you're looking for.

While English music is limited to a handful of odd CDs and a completely random collection of cassettes (most of which are either more than a decade old, or are movie sound tracks), they've got English movies pretty well covered on DVD and VCD, though a bit limited to blockbuster hits.

One area where Planet Music really shines is in its computer & video games section. They've got everything from original sealed boxed games to black market Playstation & Xbox sleeved discs. They dabble with accessories as well, from headphones to blank discs & storage cases. Educational, training and devotional CDs aren't scarce either.

ADVERTISEMENT
This page was tagged for
music cd in himaytnagar
planet mobile himayath nagar hyderabad
planet music himayathnar
movie planet charminar headphones
cd dvd blank media sealed boxes sales at himayat nagar hyderabad
Follow @fullhyderabad
Follow fullhyd.com on
About Hyderabad
The Hyderabad Community
Improve fullhyd.com
More
Our Other Local Guides
Our other sites
© Copyright 1999-2009 LRR Technologies (Hyderabad), Pvt Ltd. All rights reserved. fullhyd, fullhyderabad, Welcome To The Neighbourhood are trademarks of LRR Technologies (Hyderabad) Pvt Ltd. The textual, graphic, audio and audiovisual material in this site is protected by copyright law. You may not copy, distribute, or use this material except as necessary for your personal, non-commercial use. Any trademarks are the properties of their respective owners. More on Hyderabad, India. Jobs in Hyderabad.