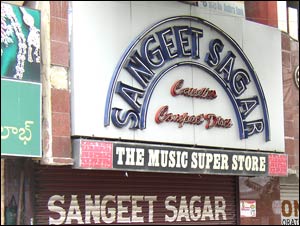 Ramakant D S / fullhyd.com
Back then it was a family business. A few years later, it became a household name. Now the Sangeet Sagar ventures in Hyderabad have turned into landmarks.

By virtue of providing quality service, Sangeet Sagar has evolved into one of the most famous music stores in the city. The ambience strikes any new visitor instantly. It doesn't reek of the artificiality or the in-your-face corporateness of other popular stores. Sangeet Sagar invites you into a cosy shop where categories and genres are neatly distributed. The assistants behind the counter enquire what Saab is looking for, and promptly advise you. This behavior isn't to be confused with the same "Kya hona saab?" expression by the book-store owners at Koti. Out there, they make it look like their business is your fault. But then, our pathetic lives have faulted enough on their own.

Digressing back, here's our word of advice. Go to Sangeet Sagar without a prepared list of albums to purchase. Those stares confuse you since you won't know whether they are sincerely interested in helping or whether they want you to get out. Secondly, don't walk in asking for material like Yngwie Malmsteen's Flamence Diablo. The poor man will think you are trying to communicate - if you are planning to show-off your new-found knowledge of international music, try someplace else. While Sangeet Sagar deals in a good deal of music, the emphasis is on the Indian and classical music.

Sangeet Sagar also has a decent collection of VCDs and DVDs. Watch out for their annual discount sales for a good bargain.

Also: Sangeet Sagar, Basheerbagh
Share. Save. Connect.
Tweet
SANGEET SAGAR SNAPSHOT
EVENTS AT SANGEET SAGAR
There are no events at Sangeet Sagar scheduled currently.
SANGEET SAGAR USER REVIEWS
1 - 2 OF 2 COMMENTS
POSITIVE  |  NEGATIVE |  NEWEST  |  OLDEST  |  MOST HELPFUL  |  LEAST HELPFUL
USER RATING
5.7
3 USERS
Quality
Service/Courteousness
Value For Money
5.5
5.0
6.0
krichton on 11th May 2012, 7:30am | Permalink
Where the heck is the contact number?
yash pathak on 28th Jul 2013, 11:11am | Permalink
sir i want movies of nirupa rai
1 uchihavelli
2 bazigar
3 superman
can u plz hepl me in getting this movies
what ever will be the cost i will pay for this movie
its a humble request so plz hepl me
this is my phone no
08602392886
my email id
shyash7@gmail.com
Parvath on 3rd Nov 2011, 6:45pm | Permalink
I happened to visit Sangeet Sagar Store(iMax), today. I had one of the worst shopping experiences of my life. Even as we were entering, a salesman approached and asked us "kya chahiye"? We said "no thanks" and started looking around. We started looking at some of the English titles. The same salesman approached us again and asked us "kya chahiye"? We told him clearly "We do not have a particular title in our mind, and if we like something, we will buy....!" He said "Window shopping is not allowed, you guys can leave if you do not have any particular title in mind". He was so rude towards us and said...."you guys are disturbing others by talking in Telugu...!" Apprently, he thinks, those who talk in Telugu in public places do not deserve any respect. Finally when I wanted to talk to the manager of the store, they simply refused to give his number, or take any written complaint. I did not see any complaint box.

ADVERTISEMENT
This page was tagged for
sangeet sagar in Hyderabad
Sangeet Sagar Secunderabad, Telangana
sangeet sagar hyderabad, telangana
dvd shops in secunderabad
famous cd and dvd at abis sangeeth
Follow @fullhyderabad
Follow fullhyd.com on
About Hyderabad
The Hyderabad Community
Improve fullhyd.com
More
Our Other Local Guides
Our other sites
© Copyright 1999-2009 LRR Technologies (Hyderabad), Pvt Ltd. All rights reserved. fullhyd, fullhyderabad, Welcome To The Neighbourhood are trademarks of LRR Technologies (Hyderabad) Pvt Ltd. The textual, graphic, audio and audiovisual material in this site is protected by copyright law. You may not copy, distribute, or use this material except as necessary for your personal, non-commercial use. Any trademarks are the properties of their respective owners. More on Hyderabad, India. Jobs in Hyderabad.