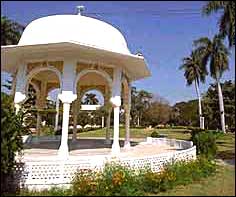 Ghazala Rizvi / fullhyd.com
The morning hums with the din of the walkers, some of them wanting to be let in as early as by 4.00am. In hundreds, the joggers, walkers, skippers, badminton enthusiasts and odd athletes nursing varying levels of aspirations, descend on the premises. The Gardens truly wake in full bloom, with the kerbside chana-waalas voicing their existence loudly to the odd policeman who chances upon them.

Yes, the Public Gardens continue to be the hub of their neighbourhood, and for several people, a lingering interpretation for verdancy, even if the city now has behemoths like the Kasu Brahmananda Reddy Park and the JVR Park. Much more than the Assembly, the Public Gardens present a fine blend of tradition, adventure, growth, freedom, equality and friendship - visiting the place is almost like visualizing the meaning of the golden chapter on the Fundamental Rights in the Indian Constitution.

Established by Khan Bahadur Ahmed Alladin on the Silver Jubilee of Asaf Jah VII, the Central Lawn of the Public Gardens has an interesting fountain standing sturdy since 1937. Ideally meant to be a heaven for the Begums and their escorts, the main garden and its minor siblings are now a haven for all Hyderabadi junta. With apt vengeance, the people of Hyderabad claim their share of this ode for freedom.

The imposing main gate (next to the Assembly) of the Public Gardens gives way to a large, trellised courtyard of a large mosque and its attached library. Blending into the true spirit of Hyderabad, the Gardens house a mosque and a temple, a Jawahar Bal Bhavan where the kids have their say, a massive Jubilee Hall where the more vocal of the adults can have theirs, and, of course, the Lalitha Kala Thoranam.

It is an unacknowledged tradition that each generation introduces its young to the evergreen Jawahar Bal Bhawan and the giant Lalitha Kala Thoranam screen. And over the years, colleges dealing in botany, arts, history or archeology have found their courses to be incomplete without an occasional students' tour to the A P State Museum, the Health Museum, and the flora-rich nursery and gardens maintained in the Gardens.

The Lalitha Kala Thoranam, created in a record 90 days during NTR's regime, and the adjacent Horticulture Department's nursery, stand on the once acclaimed Saru Bagh. The Iron Gate, which gives way to the Haj House and the L B Stadium, is the toned down version of the erstwhile Mehbooba gate. While open to pedestrians, it officially forbids casual commuters from venturing inside - a task made difficult due to the direct, short-cut route to the Nampally Railway Station, just next to the nursery.

Over the years, the place has seen numerous changes, good and bad. In place of the JBB and the Indira Priyadarshini Hall, there was once a zoo park housing tigers and deers. Unfortunately, a tiger decided to pay a casual visit to the nearby Assembly. The then Chief Minister, Kasu Brahmananda Reddy, thought it safer to shift the animals, since there were enough wild ones in the Assembly already.

But in the distinct flavor of the city, plenty of the old stands still shoulder to shoulder with the new. Today, motorboats allure the timidly adventurous type, while a Bird Park caters to people with milder tastes. There are generous plans in the pipeline for converting the Public Gardens into one of the tourists havens in the very near future - though, at present, the evenings provide a recluse to people not seeing eye-to-eye with the Tourism Department's idea of fun tourism.

Every river has its bottom, though, and you'll find hordes of men for whom this is the old neighbourhood, who are busy at their satta, drinking and brawling, and with making out. A major headache to the occasionally conscientious watchmen (there are 9 of them, not all equally conscientious), and an acute embarrassment to people on an innocent family outing. This shady aspect of the Public Gardens is mushrooming right under the shadow of the Police Control Room, and not just literally. An entry fee might work a trick or two.

Yet, unlike numerous other government-cared bodies that groan under the years of drain and depletion of resources, the Public Gardens have a well-entrenched program for self-redemption. Banking on the deep emotional attachment of generations of the city slickers, the Gardens have ensured a well-kept and spruced-up future for themselves.

ADVERTISEMENT
This page was tagged for
public garden telephone numbers
nampally public garden mobile number
public garden contact numbers
public garden contact
Nampally horticulture department events
Follow @fullhyderabad
Follow fullhyd.com on
About Hyderabad
The Hyderabad Community
Improve fullhyd.com
More
Our Other Local Guides
Our other sites
© Copyright 1999-2009 LRR Technologies (Hyderabad), Pvt Ltd. All rights reserved. fullhyd, fullhyderabad, Welcome To The Neighbourhood are trademarks of LRR Technologies (Hyderabad) Pvt Ltd. The textual, graphic, audio and audiovisual material in this site is protected by copyright law. You may not copy, distribute, or use this material except as necessary for your personal, non-commercial use. Any trademarks are the properties of their respective owners. More on Hyderabad, India. Jobs in Hyderabad.