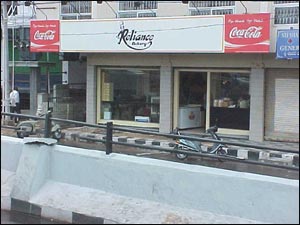 Priyanka Pulla / fullhyd.com
Like the Petrochemicals major, this one is an Eats major. Well, maybe not quite, but the 400 sq. ft. bakery is spilling over with eats of a million kinds: from packed thepla with mirchi ka achar, khakra and nylon sev to ready-to-eat Chinese soup, bowl-size servings of Chicken Manchuria and Tikka.

Of course, as a bakery, it remains true to its name and has its own range of biscuits, cakes and cookies that are popular the world over. Okay, so they have an outlet only on the Begumpet Airport road, but like most respectable Hyderabadi set-ups of any repute, they count ABCDs and NRIs among their customers.

The cramped space, though, might really irritate you if you want to eat at one of the two tables here. You will have to share them with tantrummy kids pointing out sweet-tooth appeasers to their stern parents and, if you choose to stand, the constant bumping by eager chumps trying to get at the goodies will really drive you nuts.

But what Reliance Bakery is the absolute best for, is takeaways. They have quality stuff at quality prices! The Chocolate truffle pastry here is only Rs. 15, and while just a tad less loaded than the Baker's Inn one, is absolutely yummy and authentic, enough to satisfy even the discerning chocoholic. No kidding - Rs. 15, and it's the real thing! So next time there is a party at home, get stuff from here and save the guilt trip. It's loaded upto the point of satisfaction, beyond which your taste buds really don't function, and it is gleefully cheap.

Their butterscotch pastry is famous, too: it's light and fluffy enough to give the illusion of being low on calories. The Shrewsbury biscuits have a buttery, celebratory flavor, and will give your Karachi fruit a run for their money. And the chocolate chip cookies have homemade chocolate, though understandably they are not that loaded.

Reliance takes party orders, and from how well it is stocked, it probably more than satisfies. So go discover Reliance the next time you need a little stuffing. Or throw a party financed by its wonderfully cheap prices.
Share. Save. Connect.
Tweet
RELIANCE BAKERY SNAPSHOT
EVENTS AT RELIANCE BAKERY
There are no events at Reliance Bakery scheduled currently.
RELIANCE BAKERY USER REVIEWS
1 - 1 OF 1 COMMENTS
POSITIVE  |  NEGATIVE |  NEWEST  |  OLDEST  |  MOST HELPFUL  |  LEAST HELPFUL
USER RATING
10
1 USER
Quality
Service/Courteousness
Value For Money
10.0
9.0
10.0
indika on 30th Dec 2009, 5:39pm | Permalink
I have been a regular to Reliance Bakery since my childhood. Its the best bakery in Begumpet = Somajiguda area. Their pastries are probably the best I have ever had anywhere. Shrewsberry biscuits are better than those you get in Pune. Also taste the brown bread, which is really good. But more often it is out of stock. Sponge cake and recently introduced orange and pineapple sponge cakes are simply irresistable. But don't try to eat the stuff standing in the bakery, its too crowded.

ADVERTISEMENT
This page was tagged for
Reliance Bakery Pvt. Ltd. Hyderabad, Telangana
cake prices at reliance
relance costo service in begam pet
cake prices in reliance bakery Begumpet
reliance bakery in begumpet
Follow @fullhyderabad
Follow fullhyd.com on
About Hyderabad
The Hyderabad Community
Improve fullhyd.com
More
Our Other Local Guides
Our other sites
© Copyright 1999-2009 LRR Technologies (Hyderabad), Pvt Ltd. All rights reserved. fullhyd, fullhyderabad, Welcome To The Neighbourhood are trademarks of LRR Technologies (Hyderabad) Pvt Ltd. The textual, graphic, audio and audiovisual material in this site is protected by copyright law. You may not copy, distribute, or use this material except as necessary for your personal, non-commercial use. Any trademarks are the properties of their respective owners. More on Hyderabad, India. Jobs in Hyderabad.