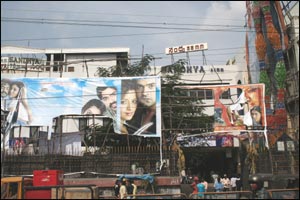 Mithun Verma / fullhyd.com
Would you run a bug-infested Windows98 when you can run 1,000 upgraded bug infestations? Would you listen to an audio tape when you have an mp3 watch? Would you go to Ooty when there are folks partying on Mars? If 'yes' is what you would say to all those, please dive naked into some ice water. We need to preserve your DNA, you unnamed species.

But if you're like the rest of mankind, or any other kind that likes to eat popcorn in dark halls, then you would find Sandhya 35mm a little old-fashioned perhaps. Having said that, old-fashioned can also be classy sometimes.

In a jazz-up-Johnny mission throughout the city, theater owners have spent some major Gandhis in renovations. Somehow the trend never really impressed Sandhya 35. Their logic - why change perfection? Our logic - yuk! The way the place sometimes smells, you'd go bald in the nose. But the sound and picture quality in the hall is fairly decent. The leg space is an issue for debate, though.

Being right opposite to Bawarchi helps to drive in traffic to Sandhya 35, and so does the choice of movies playing here - the latest Telugu releases, usually given an open run. Plus, it is sitting in RTC X Roads, the Telugu movie cauldron of Hyderabad.

In all, Sandhya 35 isn't a bad place to catch a movie - it's just that there are better ones around.

ADVERTISEMENT
This page was tagged for
Sandya 35 mm rtc x rodes contact no
Sandhya 35mm rtc x roads hyd contact no
satya 35mm rtc cross road
Sandhya Cinema Hall 35mm
????? 35 mm ?????? ???????
Follow @fullhyderabad
Follow fullhyd.com on
About Hyderabad
The Hyderabad Community
Improve fullhyd.com
More
Our Other Local Guides
Our other sites
© Copyright 1999-2009 LRR Technologies (Hyderabad), Pvt Ltd. All rights reserved. fullhyd, fullhyderabad, Welcome To The Neighbourhood are trademarks of LRR Technologies (Hyderabad) Pvt Ltd. The textual, graphic, audio and audiovisual material in this site is protected by copyright law. You may not copy, distribute, or use this material except as necessary for your personal, non-commercial use. Any trademarks are the properties of their respective owners. More on Hyderabad, India. Jobs in Hyderabad.