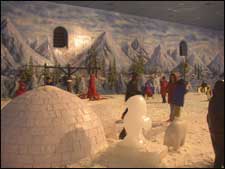 Deepa Menon / fullhyd.com
Snow in Hyderabad. You would be missing something if you didn't visit the city's only frozen wonder (if you don't count Famous Ice Cream).

From the same people who brought you Ocean Park, comes this theme park of mammoth proportions that lets you spend an entire hour in sub-zero land. Before you enter, you are equipped with bulky jackets, mittens, boots and two minutes in an acclimatization chamber. This last procedure is crucial if you don't want your jaws to freeze shut inside the main dome.

When you first walk in, irrespective of what you're expecting, you're a little disappointed. Mainly because the snow 'falls' only for 10 minutes - and the dome itself seems kind of small for a theme park. But you'll forget all that when you look down.

There's something about seeing snow for the first time that makes you want to grab a handful and throw it at someone. You'll finally understand what Calvin goes through every time Susie passes by.

Apart from throwing snow at each other, people also enjoy getting on the bumping-car and toboggan rides. The first is only for children, and isn't really novel except for the fact that it happens on an ice-rink. A much more fun deal is the rubber toboggan that you carry to the top of a high slope and come down in screaming - and usually facing the wrong way. Once you've tried it, you can't get enough.

Another slightly more adventurous game is trekking up the slope with around forty other people, all clutching on to a rope knotted at intervals. This is as tough as it looks, and not many people make it all the way to the top. Most slip halfway through, hang on to the rope tenaciously for a while, lose their grip, ram into the legs of the person behind them, and then resignedly slide back to the end of the line on their frozen behinds. Good fun.

Apart from these few activities, there's not much excitement at Snow World, and most people prefer to toss a ball around, crawl into the igloo or get on the awfully slow merry-go-round. Inexplicably, the snowman and igloo are made not of ice or snow, but plastic. They only use the real deal for the ice-sculptures.

An Aquarium Park and a Snow View Restaurant will soon be in the neighbourhood, but for now Snow World rules Lower Tank Bund. It is, to borrow an old Kelvinator tagline, the coolest one.

ADVERTISEMENT
This page was tagged for
snow world ahmedabad full address
snow world hydrabad phone number
world of snow in bangalore
snow wrld of hyderabad
snow world phone number.com
Follow @fullhyderabad
Follow fullhyd.com on
About Hyderabad
The Hyderabad Community
Improve fullhyd.com
More
Our Other Local Guides
Our other sites
© Copyright 1999-2009 LRR Technologies (Hyderabad), Pvt Ltd. All rights reserved. fullhyd, fullhyderabad, Welcome To The Neighbourhood are trademarks of LRR Technologies (Hyderabad) Pvt Ltd. The textual, graphic, audio and audiovisual material in this site is protected by copyright law. You may not copy, distribute, or use this material except as necessary for your personal, non-commercial use. Any trademarks are the properties of their respective owners. More on Hyderabad, India. Jobs in Hyderabad.