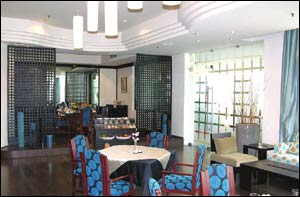 Walk into the hushed interiors of Spice Junxion, and find exactly what you expected - a politely sophisticated place with mellow lighting, elaborately set tables, socially correct staff, the works. A place that makes you wish you'd googled the word "decorum" before heading here. A place where you don't eat - you dine, for a good couple of hours.

Spice Junxion is the only south-Indian specialty restaurant in the Taj group in town, and competes with ITC's Dakshin in the space of the five-starred blue-blooded dosas and gongura pacchadis. The decor doesn't give away the fact, though. It's as generically five-star as any other you'll encounter anywhere.

Spice Junxion, while serving arguably some of the most authentic south-Indian food in town, has also taken the art of experimentation pretty seriously.

So while you begin with the highly addictive panagam (that's panakam for us folks here in AP, the jaggery-ginger-tamarind drink), the homely majige (majjiga), or some coconut water mixed with honey, mint and lemon, it's the fennel and ginger martinis that are heavily promoted here.

Then, you begin drooling at the spice trolley that they wheel over to your table. Stacked with over 30 pickles, chutneys and podis, some of the jars on this trolley can also be bought - if you order 48 hours in advance, that is. Pickles cost either Rs. 100 or Rs. 125 by the jar here. These dips range from the regular - mango pickle, lemon pickle, kandipodi, curry leaf powder, coconut chutney, coriander chutney - to some unconventional spin-offs that include pickles made of beetroot, carrot cabbage, drumstick, fish, prawn and chicken.

Starters include fried variants of potato and okra, and also the paruppu vadai (fried lentil patties, or the dal vada in the north), the royyala vepudu, and luqmi as well. A live counter dishes out dosas, appams and the Malabar rotis, that you traditionally pair with the vegetable stews, avials, and of course, with anything from the impossibly complete spice trolley.

The rice menu features the regular suspects - pulihora, tomato rice, lemon rice and bisi bele bath. They're recommended to be teamed up with the gravy-rich curries, stews and dals that native to Nellore and Seema from Andhra Pradesh, as well as from Tamil Nadu and Kerala. A smidgen of north Indian fare including rotis and seekh kababs might satiate the comfort-seeking northerner.

Among the offerings that Spice Junxion takes pride in are what it calls the "spare parts of the day" - a kidney, brain tail, or anything that catches the chef's fancy that day. Then, there's the Meeka Pilla Miriyalu, a painstakingly prepared dish made of marinated lamb in gravy, that costs Rs. 6,000, and whose order has to be placed 48 hours in advance.

You round off with traditional south-Indian desserts - featuring the pesara pappu payasam and the elaneer payasam - but what Spice Junxion glorifies is the Pan Ice Cream.

To simplify matters, you could ask for the Chef Taster's Menu, a platter of pretty much everything that the chef recommends - served one course after another.

As for the prices, the vegetarian dishes are priced at an average of Rs. 200, while meat and seafood cost upwards of Rs. 300.

ADVERTISEMENT
This page was tagged for
Spice Junxion Hyderabad, Telangana
hyd movies
spice junxion menu taj
address of spice hotel in hyderabad road no 10 banjara hills
deccan spice
Follow @fullhyderabad
Follow fullhyd.com on
About Hyderabad
The Hyderabad Community
Improve fullhyd.com
More
Our Other Local Guides
Our other sites
© Copyright 1999-2009 LRR Technologies (Hyderabad), Pvt Ltd. All rights reserved. fullhyd, fullhyderabad, Welcome To The Neighbourhood are trademarks of LRR Technologies (Hyderabad) Pvt Ltd. The textual, graphic, audio and audiovisual material in this site is protected by copyright law. You may not copy, distribute, or use this material except as necessary for your personal, non-commercial use. Any trademarks are the properties of their respective owners. More on Hyderabad, India. Jobs in Hyderabad.